It’s finally here, the 7th edition of the Intelligence Annex about the world in Tom Clancy’s The Division has been arrived. A bunch of developers, including Technical Art Director Sebastian Lindoff, Lead Environment Artist Benedikt Podlesnigg, Senior Game Designer Fredrik Thylander, and Lead Concept Artist Tom Garden tell us more about the indoor and outdoor environments, how weather affects us players and lighting differs based on the time of day.

The following article focuses on the gameplay specific repercussions, so continue if you are ok with this, or read the full article here!

Everyone Likes the Cold, Right?

But will it actually effect us players when we are caught in a snow storm? The answer is yes and it seems to have more impact than we have initially thought, because what Fredrik says is, that the visibility will get worse for NPCs as well as the agents while the worst storm conditions will even effect the aim assist and detection ranges, which sounds very innovative and funny.

when in a full storm, visibility is hindered, both for NPCs and the agent. Our worst storm conditions that can hit will affect aim assist and detection ranges for both players and NPCs.Senior Game Designer Fredrik Thylander

As we already know, civilians, factions and wildlife will react differently to time of day and weather conditions and sometimes, not at all, as it’s stated in the Annex.

Besides the weather effects, the game is rich of lighting effects all over the place. While some of them, like street lanterns are just there because they are there, “light sources can draw attention to key aspects of the environment” and there will be very dark blacked out areas where we hopefully have something like a flashlight or glow stick  in our inventory. Even if not, just pull out your for extractions used flare-gun and shoot in the direction you are looking at (if that’s possible) :)

As Lead Concept Artist Tom Garden says, this all helps them to add more replay value to various missions in the game.

A Stroll Through Manhattan

Manhattan, the often said economic and cultural center of the US, with its skyscrapers, avenues and underground offers a huge verticality, which also allows us to explore these higher places, be it rooftops, abandoned apartment buildings and maybe even a small part of the Empire State Building? 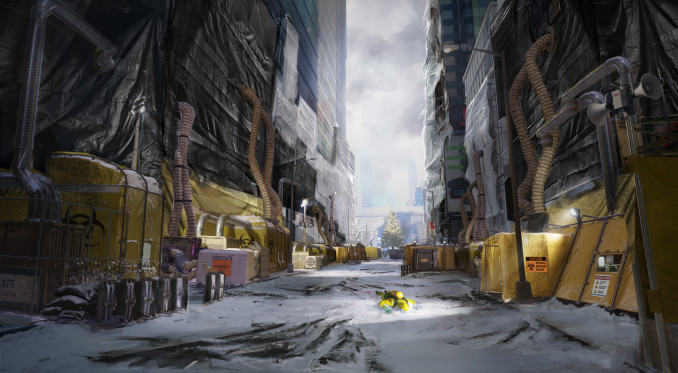 Moreover we will know, feel and immerse where we currently are. While this sounds weird at first, the developers and artists thought about the building structures and how they can effect the players feelings in different areas of the game. Sebastian emphasizes, that

buildings work as beacons, and you really feel the difference when you enter into a new neighborhood. For example, you know when you’ve entered Times Square because the buildings are generally higher and covered in advertisements, while around the hub area you get a more residential feeling.Technical Art Director Sebastian Lindoff

The Great Outdoors… and Indoors

We haven’t seen much about the indoor environments yet, except a first look at one of the police stations which was explored by a group of agents in the first E3 2013 gameplay video, but this is now finally over.

If you don’t like the harsh weather conditions outside or only prefer to walk there when the sun is shining, feel free to explore one of the dozens buildings, underground structures and other secret places instead.

In the first few seconds of the video you can notice some red triangles, connected with red lines that signalize the agent is walking in a contaminated area. While the player is wearing a gas mask in all of the contaminated areas and a blue bar is above the orange one, he doesn’t wear one in the last sequence with the big tunnel ventilator plus the blue bar is gone. We might be able to put on the gas mask manually, or the agent does this automatically as soon as he enters these dangerous areas.

Seamless transitions are one of the key aspects of the game and the Snowdrop Engine behind it. Therefore there is no load time when entering an indoor environment and vice versa. According to the Annex, they “are unique in its own right”, which largely refer to the there prevailing lighting and effects, but hopefully also implies the generation of random “dungeons” with unique hallways. We are not sure about that, but it would be great to see this mechanic in game.

If there is one situation that really makes the player feel the change of time and weather, it’s spending time indoors for a while, and stepping out to realize it might be night and there’s a snowy blizzard.Technical Art Director Sebastian Lindoff 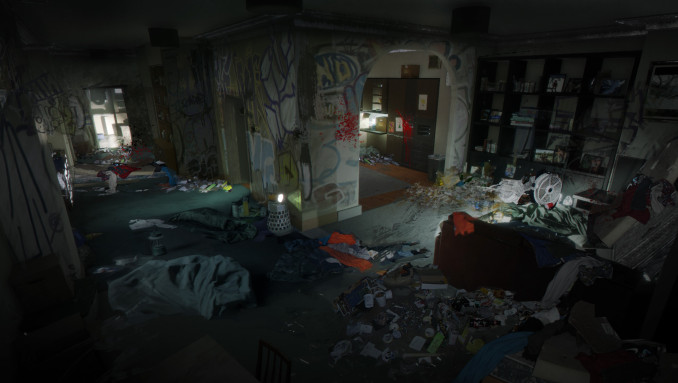