The Division Podcast #6: The Agent’s Journey

It’s safe to say that we know almost nothing about the character progression system in Tom Clancy’s The Division. All the better that episode #6 of the official The Division podcast, called “The Agent’s Journey”, covers this topic in detail. Therefore Community Developer and host Hamish Bode sat down with Senior Character Artist and Game Designer Emil Mujanovic to talk about their work and opinions on the game.

For 2D and 3D modeling, tools like Maya and/or zBrush are the first choice of the developers as previous videos have shown. For clothes they are using a completely different software called MarvelousDesigner. It allows them to create 3D virtual clothing that can virtually replicate fabric textures and physical properties.

When it comes to implementing different behaviors for NPCs, a lot of complex things and sequences are required to make them as believable as possible. With help of the in Snowdrop integrated node based behavior tree editor, the developers as well as designers can easily set things like this up and prototype just in time, even without specific knowledge of the system behind, which saves a lot of time.

Nice to hear is that there will be a lot of NPCs/factions that follow different behavior patterns and play styles, so no fight will be the same.

Sounds great at first, but what is it in particular? The multi-layer customization system is based on different visual layers with stat based and cosmetic slots. We have heard about that system first in one of the insider videos quite some time ago, where we also got at least some footage to see how it actually works.

While stat based slots automatically allow the gear to scale during the player’s progression (e.g. more armor or durability), we will be always able to change the look and feel of our agent with countless visual options to choose from.

The way this works will not only prohibit the problem of same looking people all over the place, but will also contribute to the end game content. As I personally love to customize my character, the possibility of wearing “visual-only items” throughout the game, while you can still change stat based gear items, sounds awesome.

You can be wearing the same jacket as some people in your party but you all might have different cloth versions.Senior Character Artist, Emil Mujanovic

Moreover a lot of things can be toggled on and off, which means that you can either look pretty stealthy (hello Sam) or become a Stormtrooper with pretty nice winter gear, in some way. From hiking jackets to leather jackets to color variations, there are plenty of things that will be available in the final game, even though the developers still don’t know how we will get this stuff.

They did some number tests about how many item variations there can be and he mentioned something like tens of thousands variations you could potentionally have.

In addition to the gear/clothes, also weapons will be highly customizable.

Can the Appearance of the Character be Changed Once we Started?

No, only the gear and weapons can be changed later on. But remember that you can still have multiple characters.

When Can Skills be Changed?

Skills can be changed at any time you want, even during combat – it’s not recommended though.

What About Tank Skills? 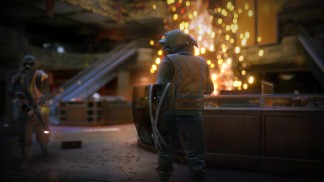 I’m very glad that we’ll have this opportunity – riot shields for everyone. Whilst carrying the shield (it’s a skill) you can’t make use of the cover system directly, are less mobile, moving slower and can only fire with your sidearm.

Furthermore the skill draws aggro from enemies (like some other skills can do). We have first seen this during E3, where a Cleaner was carrying one in a shopping mall.

Does the Backpack Affect the Amount of Items You Can Carry?

Yes, it does. In addition to that it limits the amount of certain items in the non- and contaminated loot tab. These limits can either increase or decrease, depending on the backpack you have equipped.

Will There be Any Non Reversible Character Stats?

No, you will have the base stats of your current level which are increased by the gear you are wearing.

Are All Gear Items Based on That Multi-Layer System?

That’s it for this podcast! Stay tuned for more info.