As Friday the 13th is usually considered an unlucky day, another The Division Q&A with loads of new game infos including a few seconds of ingame footage proves that you can also be lucky this day! Watch the full Q&A right here or read our detailed coverage below.

Let’s get started with the character customization. By unlocking skills, you permanently have access to them, while you can equip 2 skills at the same time, explains Game Designer Drew Rechner. You can change them whenever or wherever you want, even during combat. That’s not really new, but the ingame footage, which is running in the background, shows the new skills menu for the first time since E3 2014.

There are 3 main skill categories, called

The so called skill tiers from previous “screenshots” are now called modifications, which can be assigned to the skill they belong to. That’s how for example you can turn your auto turret into a flame thrower.

Before you can use them, they need to be unlocked, as well as the “Master” state at the very right, which will grant a “Master Bonus” to the basic skill value. In addition, skills are based on certain attributes like Range, Duration, Critical Chance and Crit. Damage, also improvable by further bonuses.

What is also new is the “Perks” tab in the upper right corner. Unfortunately we have no more information about it, but just this screen alone offers dozens of customization possibilities.

Next to the overwhelming menu, a new tactical skill called “Smart Cover” has been shown. It reinforces a cover for you and your allies, buffs your and their damage output, while incoming damage is reduced. Moreover it increases the Effect and Deploy range.

Most weapons in the game come in different versions and can be provided with a variety of skin colors and patterns to enhance the overall look and feel, as Game Designer Nikki Kuppens adds.

Here are 2 examples of the Hazmat (pre-order bonus) and National Guard (Gold Edition exclusive) skin, both for the POF P416.

According to this Q&A, weapons are based on the following stats

and a rarity level.

Every weapon can be equipped with different mods and attachments. From silencers to sights, muzzles or barrels, customize at your will! These mods can reduce threat, increase your initial bullet stability and damage as well as many other attributes not shown in this short video. 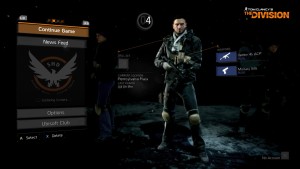 You can have up to 4 characters at the same time. The start menu is the place where you can switch between them and it’s up to you, if you want to help out your friends with your mastered char or start right away with a brand new one, as different character levels won’t prevent you from playing with them.

Depending on the inventory management and how fast equipment can be changed, the limit will show if four slots are enough throughout the endgame experience.

Last but not least, also boonie hats will be available in the game.