Now we know what yesterday’s video teaser was trying to tell us in 13 seconds – that a new Intelligence Annex isn’t that far away! The newly released 8th edition covers the topic of how to build a better agent in terms of choosing the right skill in every situation, what talents and perks are and what the experience system in The Division provides for you.

The key to all this is not just mindless leveling up your character, but also playing through the story of The Division. One of the developers, Senior Game Designer Marcus Rosengren explains, why such a level based system contributes to the overall gameplay experience and therefore is quite common for role-playing games.

It helps contextualize a player’s progression. Our brain uses contrasts all the time, so having levels gives you something to compare with.Marcus Rosengren, Senior Game Designer

It’s the challenge we all are always looking for. Whether it’s the higher level of an enemy that attracts our attention, or just their shiny items we want to hold in our own hands as soon as possible. Don’t fear to lose your character in one of these encounters if your chances of success are low, as you will respawn safely some distance away just to be able to plan your next strike.

While your character follows a normal, on levels based progression system outside the Dark Zone, the so called Dark Zone experience you gain inside the “PvP Zone” ensures, that your Dark Zone rank will increase, or decrease. The higher the rank, the more choice you have in terms of better equipment and crafting recipes at specific vendors, which is also a requirement to access high value crates.

At this point we can fairly say that crafting is not just a dream or rumor anymore, it’s definitely a part of the final game. However we still don’t know what we will be able to craft.

On the one hand, your rank can increase, but on the other hand you have to be really careful in what you are trying to do in the Dark Zone. Going rogue doesn’t just mean to annoy other players and get all their valuable loot. In case somebody is able to receive your bounty, you will lose a lot of your Dark Zone XP based on your Rogue Status.

How to Unlock Skills?

Yes, we know that there will be skills which will “define the player’s role the most” as Game Designer Drew Rechner says, but new and interesting is the fact, that not all skills can be unlocked by just reaching a higher level, but rather by completing missions.

On the contrary, skill modifications will be unlocked through mission progress.

It’s a really interesting and different approach to the typical “grind XP to max out your character” one. While you will have to play through the story to enjoy every single skill and get the most out of your character, it could also help to keep farming-bots away, well, at least to lower their efficiency.

Also nice to see is that selected skills will not be small fancy icons in the skill menu and visible when you activate them, but will also be part of your character’s appearance which generates a unique look when you are not using and only carrying them.

The choice is yours – a skill based on looks, or on functionality?

In the video above we can see the turret skill and 2 skill mod descriptions while the latter one will be equipped.

The latest Q&A has revealed how the new skill menu looks like and that perks will be a third category of options to choose from, in addition to skills and talents.

Talents will also be unlocked through your mission progress and provide a unique combat enhancement triggered through defined activities. Similar to skills you can freely swap between the unlocked ones as you like it. 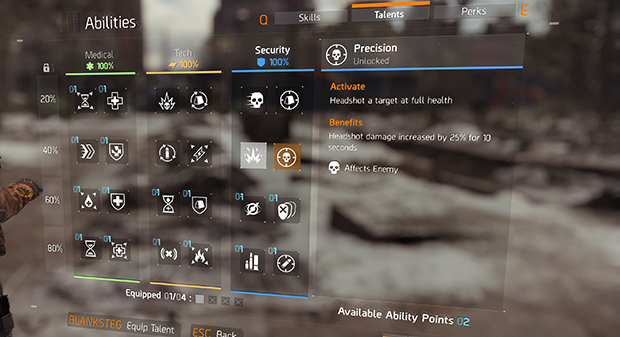 The previous screenshot shows the talents menu with the “Precision” talent selected. It will be activated when you headshot a target at full health and benefits in an increased headshot damage by 25% for 10 seconds.

Also noticeable is that 4 talents can be equipped simultaneously and what things the talent affects. In this case, it will be the enemy, but other talents could probably affect your own character, allies, or other combinations of this.

Speaking about perks, Lead Economic Designer Andrada Greciuc describes the functionality of perks as “convenience enhancers”. In contrast to skills and talents, perks work more as a passive and don’t have to be activated manually by pressing a button or fulfilling a certain action. Perks can be for example

However, unlocking all the perks is directly tied to your mission progress as well!