The Division Alpha Starts on December 9th on Xbox One

It’s finally here agents, the official announcement for the Tom Clancy’s The Division Alpha (previously announced as Beta), which will start this week on December 9th 2015 at 10 AM CET | 4 AM EST | 1 AM PST on Xbox One and will last 3 full days until December 12th at 9AM | 3 AM EST | 12 AM PST CET. So grab your controllers and play the hell out of it. 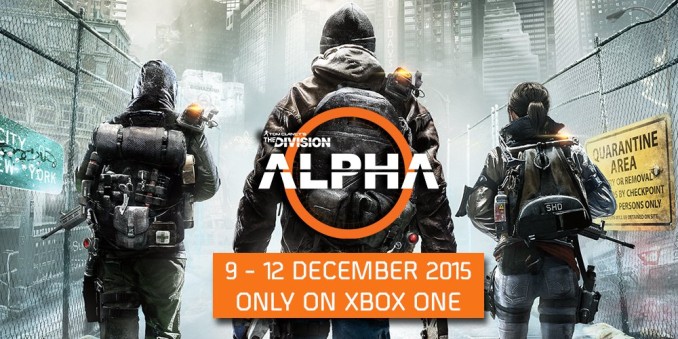 They will begin sending out the codes on December 7th, so keep an eye on your email.

Please also keep in mind that these test phases take place for good reasons before the game goes Gold. It’s not a classic gameplay demo you will play and so will probably find the one or other bug, which is good if you do so, in case you report them! Such tests help the developers a lot in terms of

All selected alpha players are invited to share their experience and feedback in the private The Division Alpha forums, at thedivisiongame.com/alpha-forums. Access to these forums will be granted only to Alpha players. This is the only place you are allowed to discuss the alpha.

However this test phase is called now, whether it’s an alpha or beta, you will be able to participate in it as long as you have either

This might not be the only thing that people confuses …

Wasn’t It Supposed to Be a Beta?

Exactly.Nobody was talking about an alpha before this announcement, so what’s an alpha phase, that comes right before the beta in the software release life cycle?

The alpha phase of the release life cycle is the first phase to begin software testing. In this phase, developers generally test the software using white-box techniques. Additional validation is then performed using black-box or gray-box techniques, by another testing team. Moving to black-box testing inside the organization is known as alpha release.Wikipedia

We have stumbled upon a comment in the /r/thedivision/ subreddit, which in our eyes describes the situation the best. Also don’t forget about that there are still three months left until the game releases on March 8th, 2016.

Note that, Alpha and Beta are a bit arbitrary, for example, in the game company I work at, we have Alpha and Beta environments (and Gold), we use them interchangeably, though the Alpha is usually used to test unstable versions, etc. or most of the time it simply runs a copy of the Beta build.

All I am saying is, don’t get hang up on the Alpha, Beta, thing, its semantics. It can be an alpha and the build can be just as finished as the release version.

Also note that Alpha and Beta may refer to server environment, they might have the same build running on Alpha and Beta, don’t think just because something is called an Alpha its unfinished or early access/development sort of a thing. It can be, but I don’t think it has that meaning in this case./u/gn0mak

Can I Upload Videos to Youtube or Livestream the Game?

No. There is an NDA (non-disclosure agreement) for this alpha. By accepting the NDA, you are agreeing to not disclose alpha information and footage to the public. This includes, but is not limited to:

Please keep in mind that The Division Alpha is not a final representation of the game. For this alpha, we will be focusing mainly on gameplay feedback and other technical aspects such as server stability. This is the first time The Division will actively be in a public testing phase, so signing an NDA is required to participate.

What Is the Size of the Alpha Game Client?

The download size of the alpha will be 23.2 GB.

If you do not own a Xbox One, please be patient as the beta phase will start early 2016 on all three platforms (PC, Xbox One, PlayStation 4). If you participate in this alpha, you will be automatically signed in for this upcoming beta.