The One and Only Dark Zone & Parts of Brooklyn Officially Confirmed

The very first in Brooklyn located The Division gameplay trailer from E3 2013 simply can’t get out of some people’s minds – especially the end of the trailer where some parts of the map are revealed.

That’s the point where we want to jump in and clear things out, because the concept behind the Dark Zone has been changed drastically during the development process, so that the many smaller/mini zones became one big Dark Zone instead.

This one and only Dark Zone in the middle of Manhattan was only tacitly confirmed through a press release at E3 2015, but somehow the question about how many will be in the game remained… It was then answered later by Adabelle Combrink, Video Game Programmer at Ubisoft Massive in the Community Q&A August 2015.

There is one Dark Zone, one super-duper mega Dark Zone in the middle of Manhattan. It’s very big.Adabelle Combrink, Video Game Programmer

We don’t know why these changes have been applied and what caused those decisions behind the scenes – we will probably never know. It could have something to do with the narrative of the game itself, but also with the player versus player mode inside the zone, including the technical requirements to implement such seamless drop-in/drop-out functionality for several instances.

The screenshot below taken from the aforementioned 2013 trailer clearly shows, that one Dark Zone was and is still located in New York City’s borough Manhattan, while two others were located in Brooklyn, which are not there anymore. 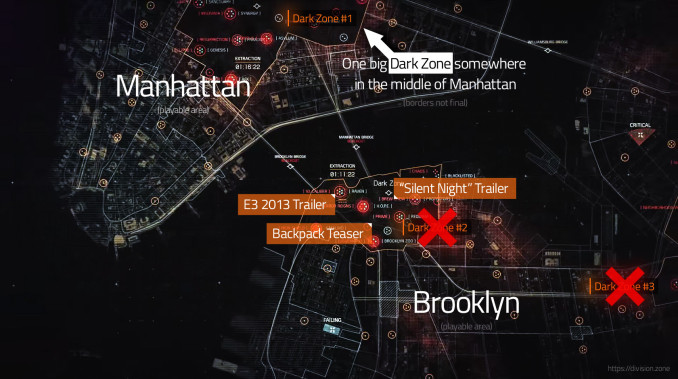 We don’t know yet where the exact borders of the one and only Dark Zone will be, however if you are interested in what info we currently have about it, you can watch this related video of MarcoStyle.

Update: Was Brooklyn mentioned too early?

Besides the playable area in Manhattan, in where we will spend most of our game time, it was obviously planned that Brooklyn is also one of these explorable areas, at least parts of it. This assumption was supported by

but never really confirmed, until now. The French Ubisoft Blog has posted a game preview and described what areas of NYC can be explored and Brooklyn is part of it. Credits to Division Agents for finding that).

In Tom Clancy’s The Division, you will evolve in a very large part of the iconic New York City. The famous Manhattan and Brooklyn neighborhoods can be explored in a reconstituted version of as closely as possible by developers. The agents will explore a living world, marked by weather and day / night dynamics.French Ubisoft Blog

Discuss in Forum Leave us a comment below
« The Division Receives Mature 17+ Rating by the ESRB » Cash Contagion: What’s the Infection Risk of Your Banknote?