A new Humble Weekly Bundle is out and this time it’s all about Tom Clancy (Encore) games and The Division. The bundle contains games from the Rainbow Six, Ghost Recon and Splinter Cell series and if you pay more than $6.58 average, you will get a The Division beta code for free. But that’s not all.

For 10 bucks more you will also receive Splinter Cell: Blacklist as well as Ghost Recon Future Soldier and well, if that’s still not enough and you have already started to throw money at your display, pay an additional $75 to get a The Division pre-order package, a free game branded T-Shirt and a Ubisoft Humble Store coupon. 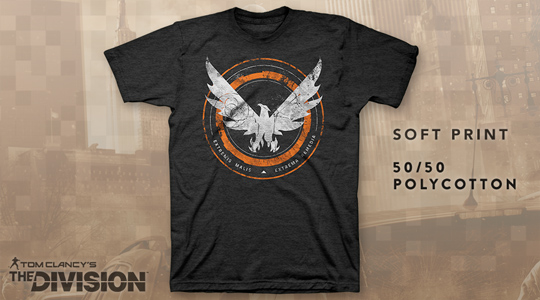 Wear your stealth credentials on your sleeve — if you’re willing to take that kind of risk — with this official The Division t-shirt designed by Fangamer’s Jon Kay. This design has a secret hiding in plain sight: glow-in-the-dark ink that’s so soft you won’t notice it until the lights go out across the city.Humble Weekly Bundle

Because of that sale, which will end in around 7 days, we shouldn’t expect a beta start in the next week at all.

Discuss in Forum Leave us a comment below
« Update: Was Brooklyn Mentioned too Early? » RTL II Reporter Talks About His Speaking Role in The Division