RTL II Reporter Talks About His Speaking Role in The Division

Alexander Bressel is a reporter and editor at the German television channel RTL II and he shares his experience (German-speaking) of a voice recording session for the game Tom Clancy’s The Division in a small sound studio in Cologne, Germany. 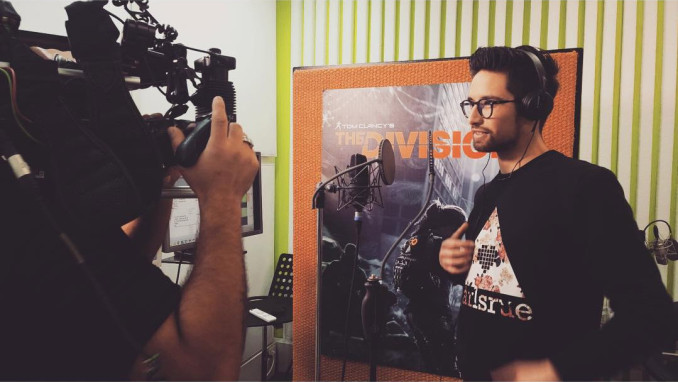 It takes the localization teams around 400 hours to record all dialogs for a new language and for German in particular, 93 voice actors have worked on the localization process for the game. Alex’s role is a teenager that has to cope with the dangerous situation in the by a pandemic affected New York City.

You have to get used to be burning (Cleaners)Alex

He had to record 7 short passages in total and while this doesn’t sound that much, he needed one and a half hour to finish his job.

“Usually the voice actors are listening to the English original (or whatever the original language is) at first and then try to speak their own text within that given time”, says Rolf Berg, a famous German actor and voice actor who is also speaking a role in The Division.

We have already learned in the past (Intelligence Annex #5 / German version) that the developers pursue and embrace attention to detail and that the game will be fully localized into several languages.

We have to deliver believable characters and to understand the complexity of this world. New York is a very cosmopolitan place and just walking around you can hear an abundance of accents and languages. Delivering this unique feeling is not a trivial task for us, so we’re challenging our localization teams to be creative and apply their language and culture expertise in the best way possibleȘtefan Petrică, Localization Project Manager

We will see how this works out and will be able to listen to their voices in cutscenes, ECHOs, mission dialogs as well as other conversations in NYC.