The Division Beta Starts January 28th on Xbox One first, followed by PS4 and PC on the 29th

It has been finally announced! After long evenings of discussions about leaks and rumors regarding the beta date, the Tom Clancy’s The Division closed beta will begin on January 28th on Xbox One first, while PS4 and PC gamers have to wait another 24 hours to be able to play it on the 29th. It will end on Sunday, the 31th, so you can play around 3-4 days in total. (Update: New end date is Tuesday, February 2nd, 12pm CET | 6am EST | 3am PST).

Beginning on Manhattan’s Chelsea Pier, the beta will take you through early story-driven missions that establish your foothold in New York. You’ll team up with other agents to battle for loot and outwit other agents in the PvP-enabled Dark Zone. The closed beta runs through January 31; you can sign up for a spot on the waitlist, or get guaranteed access on the platform of your choice by pre-ordering The Division. 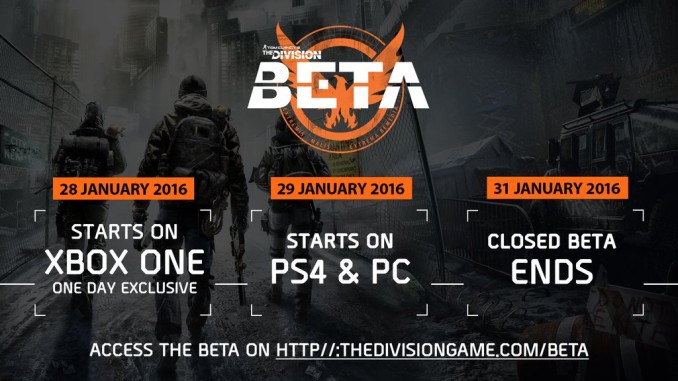 In contrast to The Division’s alpha, which was held in last December 2015 and only available on Xbox One, there won’t be any sort of NDA (Non-Disclosure Agreement) for the beta. This means that you can

As we have already mentioned last time, please also keep in mind that these test phases take place for good reasons before the game goes Gold. It’s not a classic gameplay demo you will play and so will probably stumble upon the one or other bug, which is good if you do so, in case you report them! Such tests help the developers a lot in terms of

All beta testers are invited to share their experience and feedback in the official feedback forums. If you have further questions have a look at the official FAQ (and here).

And in case you are still looking for a beta code, then head over to our Twitter channel. We’ll give away one soon there!