Besides today’s official announcement of the open beta, Ubisoft has also published a new trailer about the available factions you will encounter in Tom Clancy’s The Division. Moreover this trailer confirms that the last faction we were talking about a few days ago is indeed, the Last Man Battalion.

In addition to the trailer, the second Agent Intel mission (have missed #1?) should be available in your agent’s profile, where you have to identify each faction. All unlockable intelligence briefings can be found in the section below.

In the wake of the Black Friday crisis, New York City has been overtaken by factions–some good, some bad. Take this quiz to ensure you know which ones you can trust and which you can’t.Agent Intel 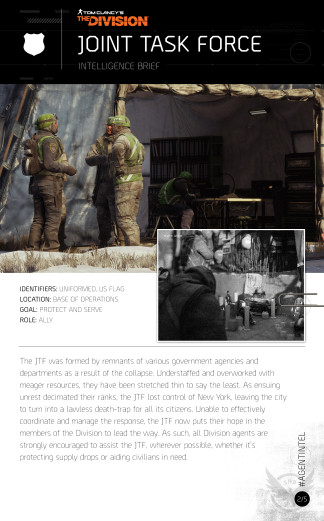 The JTF was formed by remnants of various government agencies and departments as a result of the collapse. Understaffed and overworked with meager resources, they have been stretched thin to say the least. As ensuing unrest decimated their ranks, the JTF lost control of New York, leaving the city to turn into a lawless death-trap for all its citizens. Unable to effectively coordinate and manage the response the JTF now puts their hope in the members of the Division to lead the way. As such, all Division agents are strongly encouraged to assist the JTF, wherever possible, whether it’s protecting supply drops or aiding civilians in need. 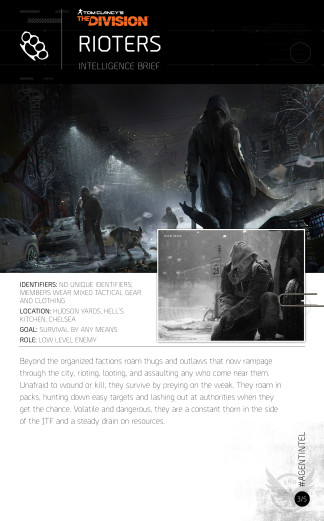 Beyond the organized factions roam thugs and outlaws that now rampage through the city, rioting, looting and assaulting any who come near them. Unafraid to wound or kill, they survive by preying on the weak. They roam in packs, hunting down easy targets and lashing out at authorities when they get the chance. Volatile and dangerious, they are a constant thorn in the side oft he JTF and a steady drain on resources. 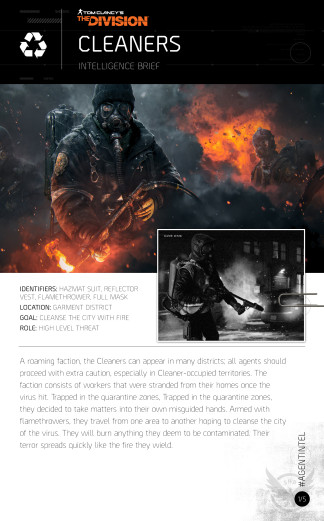 A roaming faction, the Cleaners can appear in many districts; all agents should proceed with extra caution, especially in Cleaner-occupied territories. The faction consists of workers that were stranded from their homes once the virus hit. Trapped in the quarantine zones, they decided to take matters into their own misguided hands. Armed with flamethrowers, they travel from one area to another hoping to cleanse the city of the virus. They will burn anything they deem to be contaminated. Their terror spreads quickly like the fire they wield. 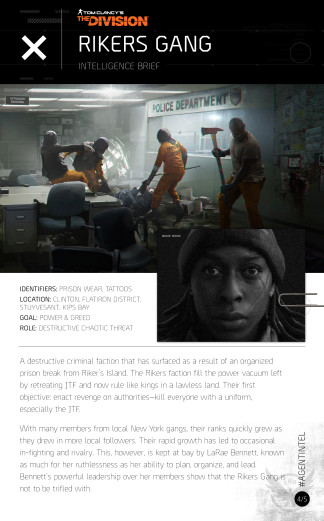 A destructive criminal faction that has surfaced as a result of an organized prison break from Rikers Island. The Rikers faction fill the power vacuum left by retreating JTF and now rule like kings in a lawless land. Their first objective: enact revenge on authorities – kill everyone with a uniform, especially the JTF.

With many members from local New York gangs, their ranks quickly grew as they drew in more local followers. Their rapid growth has led to occasional in-fighting and rivalry. This, however, is kept at bay by LaRae Bennett, known as much for her ruthlessness as her ability to plan, organize, and lead. Bennett’s powerful leadership over her members show that the Rikers Gang is not to be trifled with.

A worn and battle-weary unit recalled from overseas and diverted to Manhattan. They were none too pleased with the decision. With their requests for transfer gone unheeded and extraction not an option, this unit has become trapped far from home in the worst area oft he pandemic. Tired of indecisive local authorities, their commander, Charles Bliss, took matters into his own hands, disobeying direct orders and executing a JTF official – effectively turning his entire company and himself into mutineers.

Convinced not just the city, but the nation, will collapse under the hopeless burden of this virus, this unit has no allegiance to anyone but themselves. The LMB will use any and all means necessary to make sure they make it through the storm.