It’s now official! We will get another chance to play Tom Clancy’s The Division in form of an open beta, starting February 18th on Xbox One first, followed by PC and PS4 on the 19th. Estimated end date: February 21st. 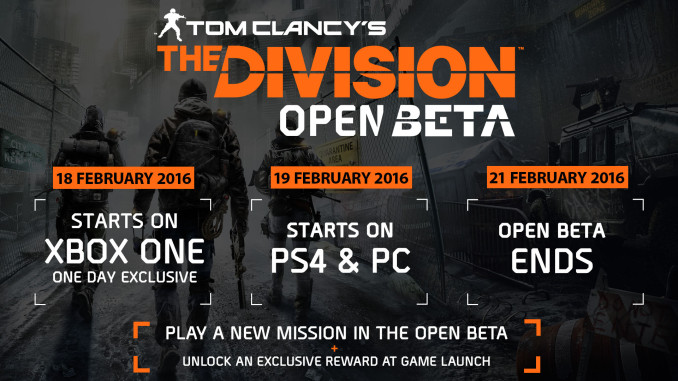 Compared to the closed beta, the open beta additionally includes a new playable story mission as well as a new unlockable exclusive reward (alpha/closed beta rewards) which you will get at game launch on March 8th, 2016.

Furthermore you should not delete the existing client if you haven’t done so yet as the open beta will be rolled out in form of an update. Otherwise you will have to download the whole client again.

There is no NDA (Non-Disclosure Agreement) for the open beta. This means that you can

As we have already mentioned last time, please also keep in mind that these test phases take place for good reasons before the game goes Gold. It’s not a classic gameplay demo you will play and so will probably stumble upon the one or other bug, which is good if you do so, in case you report them! Such tests help the developers a lot in terms of

All beta testers are invited to share their experience and feedback in the official feedback forums. If you have further questions have a look at the official FAQ (and here).