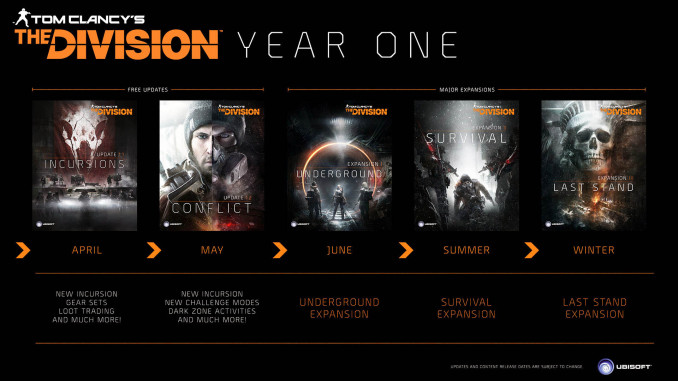 The Division isn’t even out yet, but Ubisoft and the developers love to tease us with even more awesome content we can expect in the first year after launch. Besides two free new game modes, there will be also purchasable DLCs like the three big expansions from the game’s Season Pass. But that’s not all.

Expect not only new modes to come, also gear sets, the highly requested feature loot trading, additional Dark Zone activities, daily and weekly events as well as the Challenge Mode should keep you playing for many hours after you have already finished the main campaign of the game.

This is the roadmap of new content that will be released, starting from April to Winter at the end of this year!

April. The first update called Incursions is a challenging endgame activity that is developed specifically for playing in a squad and focuses heavily on teamplay. It will be available for free and playable for everyone. In Incursions you have to stand against a seemingly unstoppable force to earn new powerful weapons and gear items. Moreover you would obviously have to protect and escort an armored vehicle in some scenarios.

May. It is said that it will change the way you play in the Dark Zone and will also add a new Incursion in the iconic Columbus Circle – a heavily trafficked intersection in Manhattan; also for free and available for everyone.

The three major expansions are purchasable DLCs. Season Pass holders don’t have to buy them as they are already included.

June. The first expansion lets players explore the uncharted underworld of New York City. Players will chase deadly enemies with up to three other Agents through an endless maze of tunnels and subways.

If you have played games like Diablo 3, then this might work similar to the there implemented (Nephalem) Rift system, with random generated dungeons and more challenging encounters as well as better rewards the more you progress. That would be great.

Summer. In the Survival expansion, players will have to survive as long as possible by gathering essential supplies and high-tech equipment to take back New York. The Rogue Protocol seems to play a big role in this mode.

Winter. A new threat rises in Winter 2016, as players and their squad must prepare to defend against a relentless foe. Based on the shown footage you will probably be able to establish your own base with turrets and other tools to hold the attackers of. Furthermore its cover art is featuring the Statue of Liberty in some way.

Last but not least here is the trailer for the new announced content.

For more information about the different pre-order bonuses as well as game versions, go to our overview page that explains all of them in detail.