No New Daily Missions Until “Incursions” Update on April 12th

Not all The Division players, but apparently most of us are experiencing problems with finding today’s Daily Missions. While it was working fine yesterday, they aren’t showing up for a lot of us today and our partner from The Division Field Guide seems to have found out why this is happening right before the big update 1.1 next Tuesday. 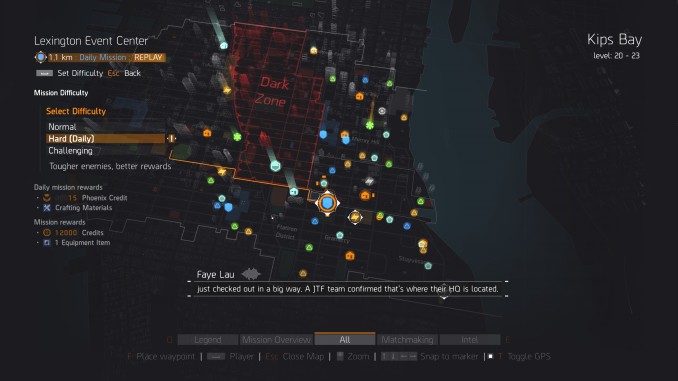 By extracting some of the game’s archives, he found out that Daily Missions seem to be some sort of pre-planned events that are written into local files periodically. According to the author, there is nothing like that for today (April 9th) and the upcoming days and that’s probably why almost nobody is seeing them too.

Update: It’s now official that new Daily Missions will be available again on April 12th. The update will be deployed during the weekly maintenance.

Please note that the issue with Daily Hard and Challenging missions will be fixed with the Update deployed on April 12. 1/2

This means that Daily Hard and Challenging missions will not be available until April 12. We apologize for the inconvenience. 2/2

Ubisoft is also already aware of this problem and has also posted on Twitter that they are investigating the situation.

Daily Hard and Challenging missions did not reset correctly today. We are investigating the situation. — The Division (@TheDivisionGame) April 9th, 2016

It might be a bug or how the system is currently implemented, so fixing it on the client side might be an option, but not recommended unless you want to risk getting banned just for some credits.

The problem with this, is in order to change or extend the schedule, they have to release an update to the game archives.The Division Field Guide

But let’s be honest, it wouldn’t be a big problem at all if Ubisoft is not able to fix this at the weekend, because the only thing you would “lose” is an extra bonus of like 30 Phoenix Credits for the 2 Daily Missions (Hard) and the 20 Phoenix Credits bonus on Challenging difficulty.

Get Your Phoenix Credits Today

So before looking for a client side solution/patch, just play some of the missions 2 times more and you have more credits than you would have earned when only playing the Dailies, because you can still get 30 Phoenix Credits by completing the for now available Challenging Missions – as often as you want! Or you can visit the Dark Zone and farm bosses for 2 PC each.

That being said, enjoy the rest of your weekend and be patient until Tuesday (3-4 days left)!

Discuss in Forum Leave us a comment below
« These 4 Gear Sets are Coming With The Division Update 1.1 » Item Drops and Crafting Changes in Update 1.1