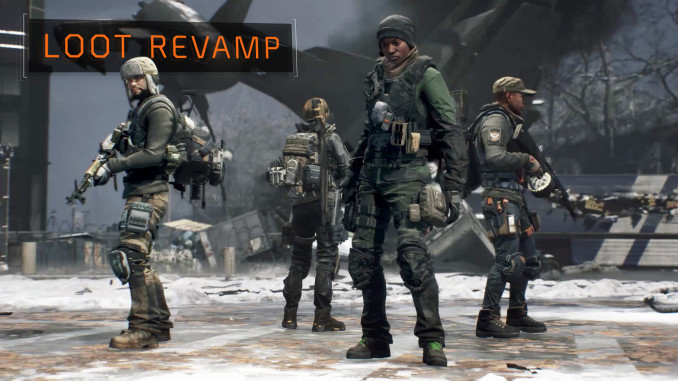 The upcoming Tom Clancy’s The Division update 1.2 comes with a completely revamped loot system with generosity in mind. You will recognize an increase of item drops as well as improved qualities all over the place, with new sources of how loot can be acquired in the open world and the Dark Zone of New York City.

The developers have therefore released a new detailed article about the changes that will change. An illustrated “loot table” can be found further down below in our summary.

Crafting stayed the main source of acquiring new gear after the release of the first free update 1.1. This is and was a problem as it “generates a less rewarding and enjoyable experience”, especially for players who managed to obtain better gear through the Incursion, but without any further perspective of improving it in other areas of the game.

With update 1.2, we want to add a layer of consistency between activities so you can obtain stronger gear from the content that you enjoy the most.

To achieve this, the developers have looked into the following:

Additionally, new ways and mechanics will be added to the game to find even more loot (also covered in the latest Intelligence Annex #10: Spice it up):

We are really excited for this update that will be released next Tuesday. While the list of changes below might be enough information for some of you, we have thought about creating something like a loot table cheat sheet, which shows what items in terms of their quality and Gear Score you can get when completing a certain mission or activity in The Division. 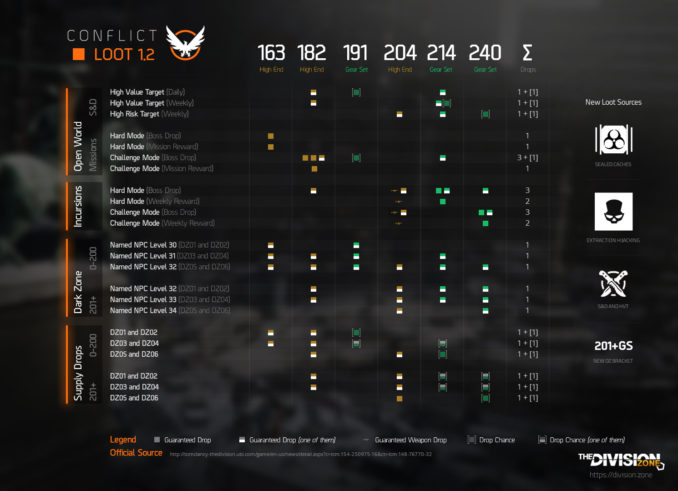 It was time to bring players back to the beauty of Manhattan or at least what’s left. The Dark Zone was the place to go once you have completed the story, without looking back at what the developers have passionately worked on for several years.

With the introduction of Search and Destroy and High Value Targets missions you will not only be able to take the city back, but also get rewarded with the best loot in the game. Best loot can then drop in the PvE and PvP Zone of The Division. Let’s have a look at what those named NPCs can drop:

In addition to the new aforementioned missions, loot drops for main missions on Hard and Challenge Mode will also be adjusted to provide a consistent line of progression. Every time you complete them, you can get one of the following items.

Also Incursions are part of the upcoming loot overhaul. You might want to give the second one called “Clear Sky” a try, because according to the developers, it will deliver a completely new gameplay experience compared to Falcon Lost. The changes below will be applied to the Incursion rewards. In addition, the Weekly Reward will now always guarantee a 204 GS High End weapon drop.

Bringing players back to the city shouldn’t cause them to leave the Dark Zone forever because of better loot. That’s why the Dark Zone receives additional changes to be on the same level as the new activities and missions in the PvE Zone. For the two existing brackets from GS 0-161 and 162-200 you can expect the following changes:

But that’s not all. For a clear line of progression between the DZ brackets, the new GS 201+ bracket will come up with even better loot, but way tougher enemies throughout the subzones from DZ01-DZ06. Moreover you won’t find any blue or green Division Tech anymore, meaning that it will be always High End with an increased chance of multiple drops per chest.

The first expectations for Supply Drops were pretty high as it should be a challenging side activity to obtain new loot, but were rapidly lowered when most of them have just dropped items of Superior quality.

Similar to the Dark Zone, the loot of Supply Drops will be based on the level of the NPCs that are guarding them and scale with the DZ bracket as well as the named zone, which in the end means much better rewards and probably more tension when other agents are joining the fight to secure them. For the GS 0-161 and 162-200 bracket, the rewards are as follows:

For the 201+ GS bracket respectively:

Discuss in Forum Leave us a comment below
« The Division State of the Game: May 19th, 2016 » The Division Update 1.2 “Conflict” – Patch Notes