Sneak Peek of the Gear Sets Coming with Update 1.3

We are still alive! and will do our best to summarize the last few days pretty soon. To kick things off, here is a short and sneak peek of 4 new Gear Sets that are expected to be shipped with the upcoming The Division update 1.3.

Update: Please head over to our overview page for all Gear Sets and their final stats.

YouTuber Arekkz was able to record a video at E3 that shows some of them in action, while focussing on their set bonuses and talents, which are still subject to change.

Not really that much has been confirmed about them yet so far, but as they were accessible during the gameplay demos at this year’s E3, they will probably be part of the next update.

Update: However, 4 Gear Sets (not further specified) will be exclusive to the Underground DLC and only 1 free Gear Set will be available to everyone as part of game patch 1.3 this time.

The provisional stats of each Gear Set can be found in the video or down below.

The B.L.I.N.D. Gear Set seems to first focus on heavy damage output, but especially its set bonus, which creates a flashbang without actually having to use a grenade yourself on the target’s death location could probably offer a high value of crowd control. Very, very very helpful against shotgunners.

With 3 additional Incendiary Bullets, the FireCrest Gear Set lets you carry up to 6 of these consumables in total. A legit alternative to the Predator’s Mark Gear Set, which makes the enemy bleed when they are hit ten times in a row. Not sure how the 4th set bonus will work exactly, but whoever wanted to become a Cleaner, this will be your chance!

Consumables are hard to find, but are ultimately effective when used in the right moment. The Reclaimer Gear Set (video) is another support oriented Gear Set with focus on the usage of consumables, while extending their base duration and applying the effect to all allies in your team. You will never have to find them again once this set is equipped.

Another Gear Set called “DeadEYE” has been spotted in IGN’s gameplay video about the “Underground” expansion. Unfortunately it’s just showing the holster (“DeadEYE quick draw holster”) and no further set bonuses at all. 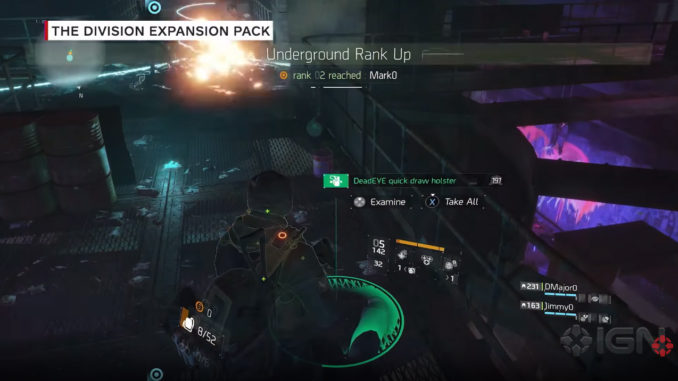 Update: Saturday, June 25th // The developers have released a new screenshot, showing the fifth Gear Set called “AlphaBridge”. Final stats of all Gear Sets will probably be revealed during the Special Report on Monday, June 27th at 19:00 CEST / 13:00 EDT / 10:00 PDT.

Again, please keep in mind that their values or even bonuses/talents are not final and can still change in the future. Anyway, all 4 Gear Sets look very promising! As the FrontLine Gear Set won’t be part of 1.3 or the DLC itself, the newly spotted DeadEYE Gear Set would be the fourth out of 5 in total that are coming – either DLC exclusive or the one that will be available to everyone.