We would like to catch up with the during E3 2016 released information about Tom Clancy’s The Division’s upcoming update 1.3 and the first major expansion “Underground” and will start with the for Season Pass owners coming DLC first. 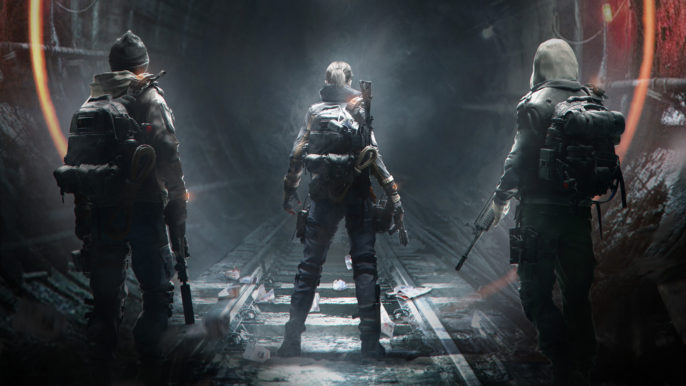 The information provided in this article is mainly based on Q&As on site, the Ubisoft Special Ops. Event as well as the latest Intelligence Annex #11 and is really only about the contents of the “Underground” DLC.

Lots of new footage was released about the on June 28th for Xbox One and PC as well as one month later – on August 2nd – for PlayStation 4 coming first expansion , including a brand new trailer, which showcases the dark subways, tunnels and sewers of random generated missions in the Underground of New York City’s borough Manhattan.

Additionally, a new Incursion called Dragon’s Nest and 4 new exclusive Gear Sets will be part of this DLC.

If you haven’t watched the trailer now, please find the video down below.

Although “Underground” is part of the The Division’s Season Pass, it is also available separately (Xbox One) for around 1/3 of its price.

In the first major expansion of Tom Clancy’s The Division, players will be able to explore the widely connected dungeons in Manhattan’s Underground with high replay value. Because you have established the Base of Operations and almost secured the city, it’s not yet told that the same happened beneath the surface. Due to yesterday’s released Intelligence Annex #11, we know that a devastating attack on a secure quarantine center is the reason for moving down into the dark to get rid of the attackers and save what remains.

During this time the factions have been infesting the Underground to regroup and plan a new wave of deadly attacks on the city. It’s our job to head down there and take this back!

The Underground can be accessed through a new area in the Base of Operations, called The Terminal, which will feature well-known things like a crafting station, stash, matchmaking hub, High Value Targets and vendors.

In contrast to the BoO, this area will work like the Social Hubs in Camp Hudson or the Safe Houses, meaning that you can meet other players there. Moreover it will be accessible through the fast travel system.

Once the area is checked out, the real thing begins when you take the elevator down to the Underground, where you will have to walk across the Tactical Operations Center.

Everything that is needed to survive the there lurking danger can be found in this place, supported by the on latest technology and best infrastructure based Underground Operation Panel and additional vendors.

What makes the “Underground” DLC so interesting is its promising high value of replay ability due to the endless possibilities of random generated dungeons, missions and mission modifiers, something we have personally missed since The Division’s launch in March.

According to Game Director Gilles Matouba from Reflections, no encounter will feel the same anymore.

…thanks to the sheer amount of level combinations we can have, it will be rare to encounter the same one twice.Game Director Gilles Matouba, Reflections

Furthermore, groups of enemies can now consist of multiple members from different factions, making it hard to predict what awaits you when looking around the next corner. In addition, they got some new toys you will have to watch out for – unless you would like to dance with some incoming shotgunners or other types of enemies.

The danger is everywhere and not only NPCs will try to make your life harder as also the Underground’s environment is filled with numerous types of hazards and traps you will definitely want to avoid. Simply going around seems to be not the one and only solution for them, instead new ways to disable them have to be found before you can continue.

Enough with the theory. Underground Operations are the playable missions that need to be configured first by the player by selecting the difficulty, number of phases, and Directives. You can already think about of how many options are actually taken into account when generating a new and unique Underground mission.

Each mission also has an overall objective assigned that players have to complete in order to be eligible for the rewards. They are as follows:

Same as for Story/Daily Missions or Incursions, you can choose between the following difficulties:

Phases basically allow you to set the overall length of an Underground Operation by selecting up to 3 objectives. One phase takes around 15 minutes to complete, obviously based on the difficulty and other modifiers you have set on start.

Directives add another layer of difficulty while it’s up to you how far you will go by selecting either a combination or all of the following ones:

The new Underground Experience will give you access to Directives and award you with the right to purchase exclusive gear and blueprints in the Tactical Operation Center.Game Director Gilles Matouba, Reflections

Like for Directives, also the new aforementioned currency “Directive Intel” is gained through killing enemies in the Underground and completing Operations of any difficulty.

The higher your rank in this progression system, the more Directives can be added to your Operation by spending previously gained “Directive Intel”.

In short you will have more options to configure your mission. You decide how far you will go and how difficult the mission should be. The greater the challenge, the greater the rewards!

Apart from the first two free Incursions Falcon Lost and Clear Sky, the third one called “Dragon’s Nest” will be only available for buyers of the “Underground” DLC.

Located on the west side, in Manhattan’s neighbourhood Hell’s Kitchen, players will encounter dozens of Cleaners with the objective to defeat their leaders – The Four Horsemen – devastating Cleaner elites that require you to use different tactics and approaches when you want to succeed.

But that’s not all, as ironically just a fire engine will try to roast you with its attached flamethrower which you can see in the screenshot below.

You might want to start investing attribute points into Burn Resistance and Exotic Damage Resilience (Final Measure Gear Set) as reaching the Armor Cap alone will probably not enough to survive this encounter.

Also 4 new and for this DLC exclusive Gear Sets will find their way into this update, Unfortunately no more details about which ones exactly will be actually part of it have been announced yet.

That’s it. More detailed information about this DLC will probably be released during next week!