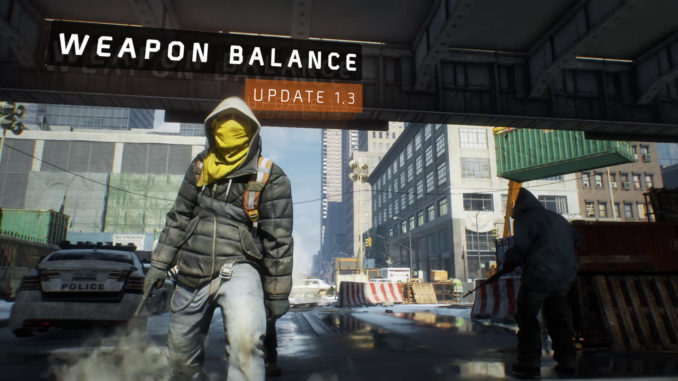 With the release of update 1.2, it was clear and foreseeable that update 1.3 will bring lots of changes regarding weapons in Tom Clancy’s The Division, as it was primarily used to gather information and statistics about the weapon usage of the currently available archetypes.

In a new official blog post the devs describe which weapon types are the most used ones and what measures have been set to be able to provide a better and more varied experience when it comes to choosing a weapon in the future.

Based on the stats the developers have gained since launch, it is pretty much self explaining which archetypes are the leading ones when it comes to a strong weapon loadout. SMGs, Marksman Rifles and Assault Rifles dominate this chart as their damage was too good compared to their counterparts – LMGs and Shotguns.

Although Shotguns and LMGs might have received some love due to the recent changes of the Sentry’s Call Gear Set and the introduction of the Lone Star Gear Set in 1.2, the bars will hopefully adapt so that every weapon of any type will be valuable at some point.

Furthermore, the blog post also unveils some insight about the usage statistics of SMGs. Because of the availability of blueprints for the AUG and Vector in the Dark Zone, they have been used much more compared to MP5s or the MP7. Also the drop rates for latter ones seemed to be lower, but that’s just a personal impression. 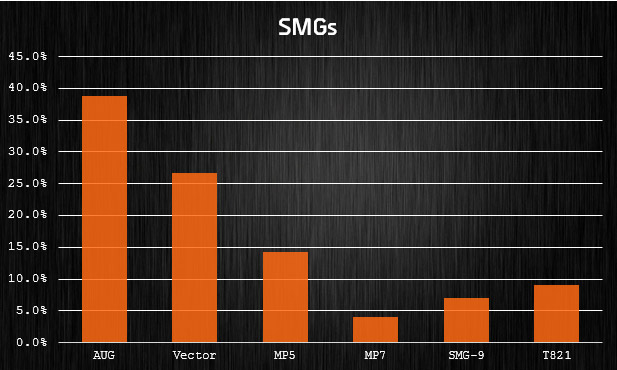 To address the current domination of the SMGs and Marksman Rifles and bring a better balance between all the weapon families, the developers are going to make the following changes:

Prior to update 1.3, only Submachine guns (Crit. Chance) and Designated Marksman Rifles (Headshot Damage) have received an additional weapon bonus, which made them very powerful compared to other types. For more diversity and as already announced, every archetype will receive a proper bonus:

Besides one new Gear Set (update 1.3) and 4 new exclusive Gear Sets (“Underground” DLC; preview here), four new weapons will be available for free and everyone. These are the following ones:

Three super good weapons that probably every The Division player has at least tried once – we are talking about the AUG, Vector and M1A – will receive a nerf with the next update:

The combination of 3 Weapon Talents on your High-End weapon simply decide whether it’s worth to use it or not, as they could provide unique effects in different situations and can significantly increase your damage output.

Unfortunately, the chance to find a decent weapon with the right talents is not that big. Because of this fact and the many requests from The Division’s community in the past, you will be able to recalibrate one of these talents like it works with attributes on your gear once the update is released. All talents can be recalibrated.

In order to be able to recalibrate a Weapon Talent, you will have to collect a new currency called Weapon Kit that can be obtained through crafting, enemy drops, and crates in the Underground. In addition, Phoenix Credits are needed to complete the process at the Recalibration Station.

New, on consumables focused Gear Sets (preview) are coming soon, which why the developers have also decided to tweak this part of the game rather than leaving it untouched.

Although Explosive Bullets are definitely not the only thing players have to fear in the Dark Zone, they provide a huge amount of burst damage and may decide the one or other fight. However, with update 1.3 this burst damage will be reduced and now scale linearly with the damage of the bullet. If you hit for 10,000 damage, the explosion will do the same.

Also Incendiary Bullets will be changed due to the release of the new FireCrest Gear Set. The time of being on fire has been reduced from 10 seconds to 3 seconds to be coherent with the longer duration provided by Incendiary Grenades.

What do you think about these changes? What is, or will be your favorite archetype once the new The Division update is out? Let us know!

Discuss in Forum Leave us a comment below
« Operation ISAC: Transmission 11 » The Division State of the Game: June 23rd, 2016