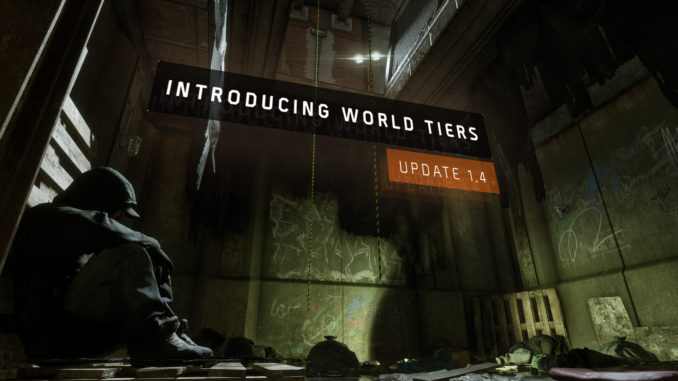 Because of the delay of the Special Report, the last State of the Game episode on Thursday, September 15th was a bit longer than usual and as previously promised fully packed with new information regarding upcoming Update 1.4. The developers mainly talked about the time it needs to kill an enemy, the difficulty scaling and also introduced a new feature called World Tiers.

Changing the systems around the Time to Kill and Time to be Killed is one of the more important parts that will be addressed within the next patch. We are not only talking about tweaking a few numbers, but more about a complete overhaul of how these systems and those who are surrounding them will work together in the future.

Time to Kill and Scaling

By just looking at the following two charts you can clearly see that the gaps between a low level character and a maxed out character at level 30 are way too big and it gets bigger when considering the use of some overpowered Skills. 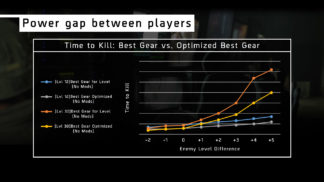 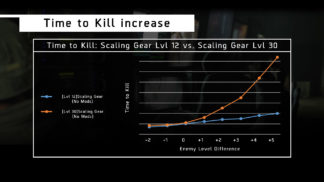 Because of these issues in scaling, the balancing is also negatively affected and almost out of control, making it much harder to kill enemies on higher difficulties on the one hand, and reducing the time a player is able to survive in scenarios because of the vastly increased damage of NPCs on the other one.

Although relying on the character’s equipment is part of the game, it should not be the only requirement to be successful as players who might not be that well geared have no perspective when trying to gear up. The main reason for that is the lack of granularity between the 4 difficulties (Normal, Hard, Challenging and Heroic) that are currently available in the game.

Without a natural progression and the absence of proper rewards, especially when considering solo players and those who cannot invest that much time, it is really hard to break the ice and reach the next difficulty level.

All the aforementioned problems have an impact on the whole game world in The Division. Therefore it makes sense to tackle the root of all those issues by introducing a new feature called World Tiers. With World Tiers, you – the player, will be able to choose between the following 4 Tiers based on your Gear Score.

Selecting one of these tiers will directly affect the level of all enemies in the game and throughout all activities like Incursions, Underground and Daily Missions. However this doesn’t mean that you are forced into a Tier like it’s working with DZ Brackets. You decide on your own whether you want to experience challenging content, or simply steamroll enemies on a lower Tier.

While the power, damage and health of the enemies will be rescaled, you won’t face any level 34 and 35 NPCs anymore as those will be completely removed from the game. Here is a comparison between the Time to Kill in game version 1.3 and Update 1.4. 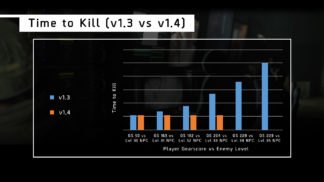 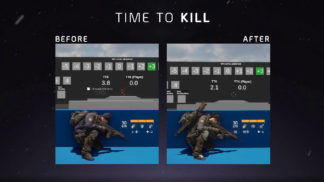 Free Roaming is Back

World Tiers will not only change the enemies’ level though. We are very excited and happy about that this will actually make free roaming in Manhattan viable again – by bringing back named bosses to the Open World that will respawn on a regular basis besides the already existing HVTs. 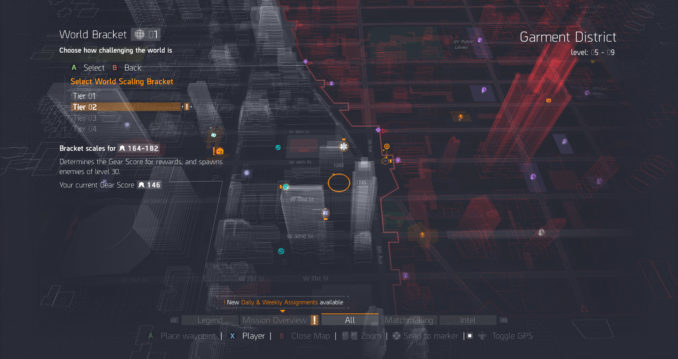 Not long ago we have written an article about this topic and it’s very nice to see that such a feature will make it into the game.

The difficulty modes themselves will remain and you will still be able to select one of them for the activities we have got right now, with the only difference that this will not affect the selected World Tier and the actual strength of enemies anymore. The difficulty itself will only be affecting the type of enemies you will encounter, speaking about Normal, Veteran and Elite NPCs as well as the amount of loot that drops – more about this later.

Worth to mention is that also solo players will benefit from those changes as the Challenging difficulty will now also scale accordingly to the size of your group. Only Incursions will always be scaled for 4 player groups.

Having the chance to roam around the city brings more opportunities to obtain loot. All enemies, no matter if they are a named boss or not, will be able to drop the best loot in the game. The chance of such a drop will be of course higher for bosses, but it exists and that’s the point. Again, the only exception are enemies in Incursions as you will be rewarded at the end after completing it.

As mentioned before, the difficulty mode will now only affect the amount of loot that drops, not the quality or Gear Score of an item anymore. This will be tied to the World Tier from now on and be structured as follows:

Because of this change and the fact that you will be the one who sets the pace, you can spend as long time as you want in a certain tier until you feel confident enough to increase it. But wait, where can you get 268 Gear Score items then? Nowhere!

In order to be able to reduce the power gap between players, the maximum reachable Gear Score of currently 268 will be reduced to 229 (back to the roots), making Gear Set items the same GS level as the best High End items are. Also the way of how Gear Score is currently calculated will be improved.

Loot weighting will more or less be entirely removed to finally allow players to spend their time on things they would like to do instead of forcing them into activities they don’t like to play at all. Guaranteed rewards will stay at some point though, including Incursions as well as more random ones.

With the Open World – the PvE Zone in the game – being reactivited in Update 1.4, Matchmaking would definitely become an useful option again and so the selected World Tier will be a basis for doing so. Only players with the same World Tier will be grouped together. Also the Dark Zone Matchmaking feature will consider the World Tier, but still calculates your Gear Score and assign you to one of the available DZ Brackets.

What do you think about these changes, are you excited for World Tiers the same as we are? Let us know in the comments below or the linked thread in our forums.