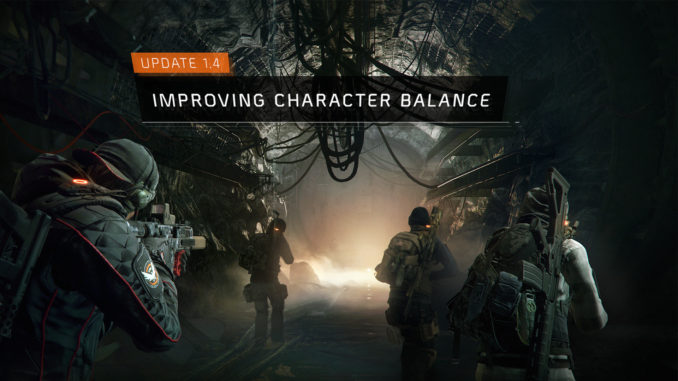 A new The Division dev-blog article about the character progression and overall character balance was published yesterday. Additionally lots of side information was revealed in the 4 hours long Special Report, which was great and a real success in every sense.

By reading through the changes, you will quickly notice that your decisions will have a much higher impact on your character and that you will have to sacrifice the one or other stat or attribute in order to fulfill a role successfully. This will keep things very interesting in the future as roles themselves become more important than ever before.

The first big change in terms of items in Update 1.4 is that every piece of equipment you obtain in World Tier 2 and higher will have all three main stats (Firearms, Stamina and Electronics) on them (one will be higher than the other two). Skill attributes will be completely removed from all gear items and other bonuses like Critical Hit Chance or Headshot Damage will be rescaled.

That might sound weird at first, but not when you see backpacks, holsters or knee pads with up to 3 Mod Slots, consisting of 1 Gear Mod Slot and 1-2 Performance Mod Slots. So you can actually get these skill attributes back by equipping your own Performance Mods. While most of these changes will be retroactive and affect your current gear – more about that later, skill attributes won’t be rerolled on these items. 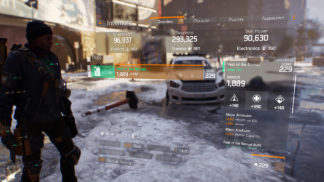 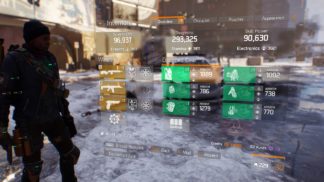 Although all Performance Mods you currently own will be rebalanced as well as rerolled and lose their major bonuses, it’s still worth to keep them for a good chance to get something useful out of them once Update 1.4 goes live!

More important for acquiring better gear is the fact that stat overlaps between Gear Scores have been removed in order to ensure to always get better stats with an higher GS item.

Besides Vigorous and Reckless chests or Savage gloves, there wasn’t really much choice in terms of High End items and their Gear Talents. That’s why those will be rebalanced to have a real alternative to the aforementioned ones and maybe also to Gear Set items!

The discussion of Gear Sets  is a never ending story and might even hold on in Update 1.4, but hopefully in a different way as it is now. By rebalancing several bonuses, especially 4-piece bonuses, the 2-piece bonuses “will focus more on utilty instead of stat bonuses”. The Sentry’s Call and Striker’s Battlegear 5-set bonus will be removed and rebalanced in their respective 4-piece bonuses.

The Scavenging attribute will be completely removed from the game. The reason for that is that the developers don’t want to see players switching gear right before killing a boss. But overall it’s also too difficult to make it viable, especially in the endgame.

One of the key aspects for The Division’s developers is to bring back and have more of that shooter feeling in the game, meaning that your weapons will feel much better after the update. Don’t get confused by the DPS numbers that will change because of new calculations in the background and also don’t forget that the Time to Kill for NPCs will be drastically reduced as you can see in these charts.

Update 1.3 was the beginning of balancing weapons and it will be continued in version 1.4 and in future patches. Some archetypes still don’t feel right, like SMGs that are dealing more damage than Assault Rifles and that’s where the developers started to also tweak numbers as well as their handling. These changes will contribute to a better feeling when using a specific weapon and in the end to the overall shooter experience.

Instead their future power will come from the fact that they are stable and have high critical damage, which means your goal is to get as many bullets as possible on the target.

Will the MP7 and M1A be nerfed? Yes they will, but again, take a look at the big picture and don’t just pick out things like this nerf. On the other side, other weapons that were honestly not really useful and therefore unpopular are the SRS Sniper Rifle and the M2-49, which damage output will be increased to provide real alternatives to choose from.

Named Weapons won’t be touched in 1.4, but as said before might be changed in upcoming updates, at least that’s what the developers have planned to do.

Weapon Mods will change by reducing the second bonus and replacing it with an amount of minor bonuses, which of course depends on the item’s quality. Furthermore some of the not so interesting and for the endgame useless stats like Headshot XP Bonus will be removed whereas others like Stability (Horizontal Stability, Initial Bullet Stability and Stability) as well as Accuracy (Accuracy, Hip Fire Accuracy) will be combined. All your weapon mods will be rerolled accordingly.

Weapon Talents are also reworked to give the player more choices and making them useful again altogether. 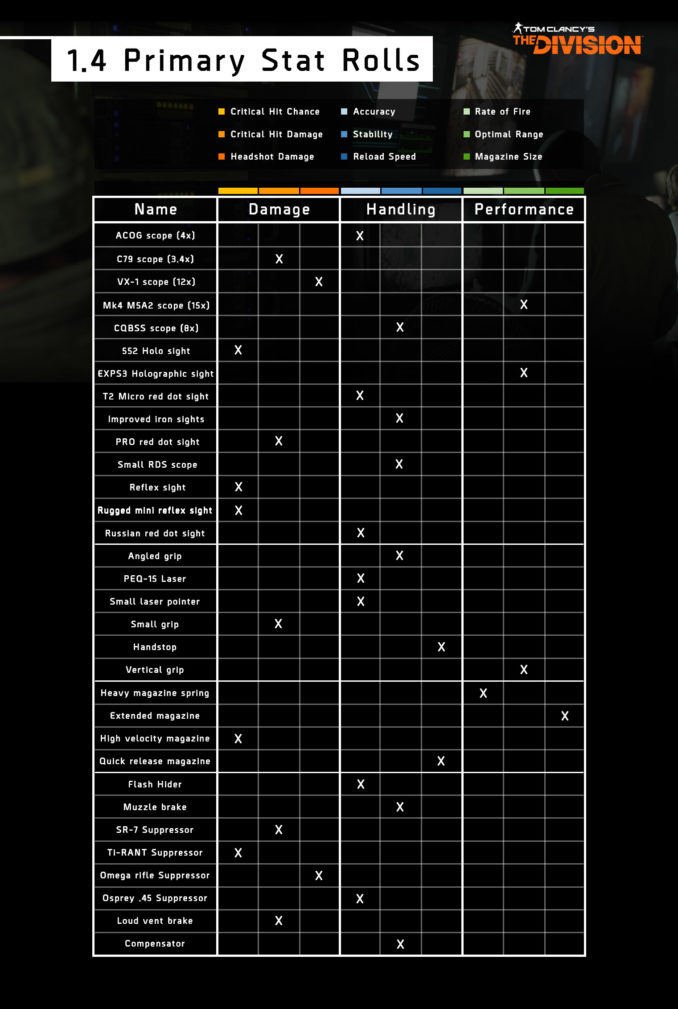 Currently in 1.3, most of the players are gaining their raw damage by either relying heavily on Skill Power and Smart Cover, or putting everything back into Firearms when their teammates are able to keep them alive. However in Update 1.4, the main stat Firearms will play a significant role if you decide to become a real damage dealer.

Damage bonuses like headshot damage, crit damage, armor damage etc, are becoming additive instead of multiplicative, which means that damage won’t spike as much as it does today. 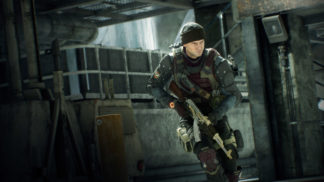 Keeping our gear’s identity at least at some point was important for the developers. Some of you have worked hard to get there, but obviously also decisions had to be made in order to maintain the overall balancing between those systems mentioned before.

Apart from the changes noted above – performance mods, scavenging, etc. – most of the time we’ve tried to refrain from replacing bonuses you have on your existing gear, so its identity remains the same. Nevertheless, the scale of the stats and bonuses might change, either up or down, in order to fit the new balance.

Similar to going for Firearms for dealing damage, the same applies for Stamina as it will be the main source of Toughness. Armor will still support you in that role, but you will need a lot more to make use of it. Moreover its damage mitigation will depend on the World Tier you are playing in, meaning the higher the World Tier, the more Armor you would need.

Skill Power is the last of the 3 main stats (besides Firearms and Stamina) that will be rebalanced on the one hand and have its scalability changed on the other one. Unless you decide to gear up for an Electronics heavy build with hard caps being removed from skills, you will probably have a hard time to get back to the roots of 1.3 as 1.4 will introduce an adjusted curve of diminishing returns to get rid of its currently linear overpowered scale.

This means that at the beginning of your journey, 1 point of Electronics might be worth 1 point in Skill Power, but later on will go down to 0.5 Skill Power per Electronics and so on. 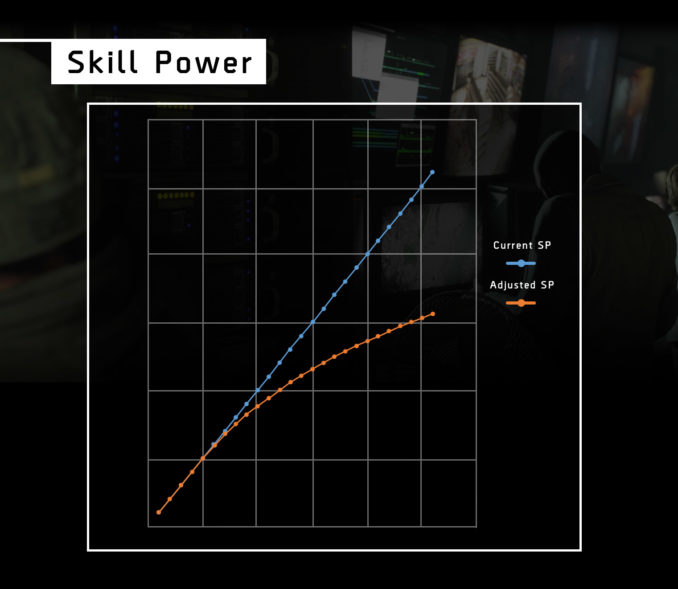 Most of the skill bonuses will be changed in terms of numbers, but some of them were also changed in the way they are working.

Spamming skills will soon be a thing of the past as the new cooldown mechanic for skills will prevent you from doing so. Instead of starting the cooldown when the skill is triggered, it will start once the skill is destroyed or its duration is over.

Out of 3 Signature Skills, in 1.3 Survivor Link was the most used one, simply because it was overpowered or better said more useful than the other 2. Some of you might have also used Tactical Link for maximum damage output, but other than this there is nothing more to add. 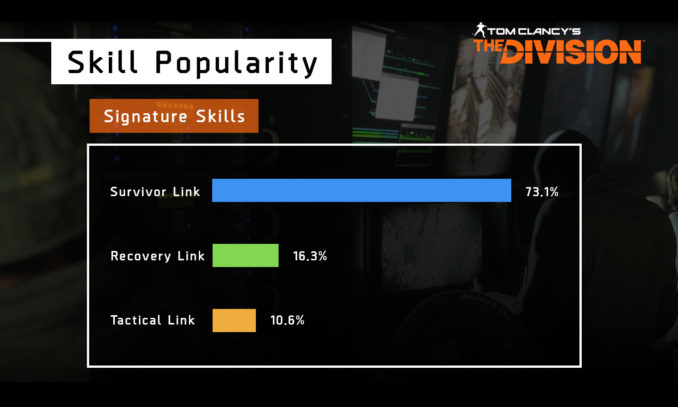 Thankfully, also this will change in 1.4, by adjusting all 3 skills to make them good enough for solo as well as group players and to get them back on par.

The Survivor Link is already powerful which why some numbers have to be lowered. While the damage mitigation will be reduced from 80% to 50%, its uptime duration will go down from 15 to 12 seconds.

Recovery Link will receive a buff in its range and healing and can now also revive dead players (only outside the Dark Zone). Furthermore especially solo players will like this new feature that will automatically heal/revive you in case you get downed. This is still work in progress, but can already be tested on the PTS.

In order to bring back the shooter feeling and with an uptime of 12 seconds, also the Tactical Link Signature Skill received some heavy changes and focuses more on the use of your weapons. Although it will be almost as powerful as before by lowering its damage buff from 50% to 30%, Critical Hit Chance will be completely removed from it and replaced with three new weapon related buffs:

Consumables are way too overpowered at the moment, especially in combination with the Reclaimer Gear Set. Not the damage is making them strong right now, but the applied Status Effects like Burn or Stagger. Update 1.4 will get rid of those effects and be focusing more on the damage itself, meaning that your bullet damage will be converted to either fire or blast damage, which is exotic damage.

Most of these changes will be retroactive. This means that the stats on your gear pieces will definitely change and hoarding overpowered “legacy” items won’t be a thing. However please try to see the big picture of all those changes together rather than looking at certain updates that will probably sound like a massive nerf. It will all benefit the overall gameplay experience and that’s what Update 1.4 is basically all about.

Is this all we get with Update 1.4? No! There is much more to talk about in the future and you can also find out more yourselves by testing the game on the Public Test Server!

« The Division PTS Early Access Keys are being sent out Now » Operation ISAC: What Happened to Simon, Esmay and Asher?