Field Proficiency: Receive a Sealed Cache Every Time you Rank Up at 30

The highest reachable character level in Tom Clancy’s The Division is 30 and will still stay there with Update 1.4. While getting rewarded with XP once you hit this max. level feels very useless at the moment, the next patch will introduce a new improvement called “Field Proficiency“.

Underground (DLC) showed how it could work by rewarding the player with Underground Caches when ranking up below Manhattan’s surface. However, even down there the system currently stops rewarding you once the max. Underground Rank of 40 is reached.

Thankfully both progression systems will be adapted and will work similar to this in the Underground (pre-40), but without an upper limit. By earning experience points and reaching the top of your XP bar at level 30 (currently 400,000 XP; or Underground Rank 40), it will reset itself as well as reward you with one of these Field Proficiency/Underground Caches that can contain multiple items and Phoenix Credits. 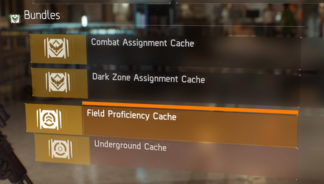 Moreover there will be more types of Caches for Daily as well as Weekly Assignments that will replace the current Division Tech, Crafting Materials, DZ XP and Phoenix Credits rewards:

Some really nice changes if you consider that also Gear Set items can be inside these loot crates. Like Supply Drops, the items’ Gear Score is based on the Gear Score you have when it drops.

Cover image was edited a bit.