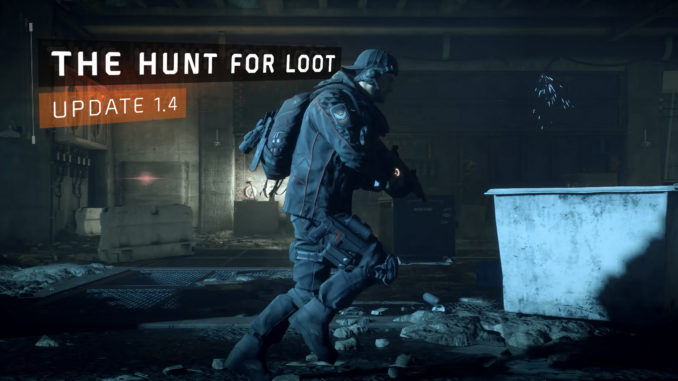 With the insight of what World Tiers are and how our characters will be balanced in 1.4, it’s time to look at what drives us players most to keep improving our gear and beating endgame content – the hunt for loot. In a new blog article, the developers are talking about what has been changed regarding loot drops in general, how loot is weighted and what role Sealed Caches will play in the upcoming update.

Regardless of what will change in terms of loot, the best and most important one in our opinion is that almost all enemies, except for non-named NPCs in Incursions, will have a chance to drop loot that is based on the World Tier you are currently playing in. You enjoy exploring the Open World in The Division? Update 1.4 will totally make this possible and will reward you with tons of items that suit your gear. This way, a constant stream of items is guaranteed and will provide this kind of natural progression so that you are able to reach and unlock the next World Tier to receive even better rewards, as a solo or group player.

In addition, you don’t have to fear anymore about getting overwhelmed with Mods all the time whereas you would for example need a certain Gear Set item or a new weapon to accomplish your build. Different item pools will ensure that a Gear Set drop will never be replaced with a Mod, instead you could get both, only the Gear Set item, or nothing. The same applies for Sidearms that won’t replace a primary weapon drop in the future, but could drop additionally to it.

The first major expansion for The Division called “Underground” introduced 4 new exclusive Gear Sets which are currently not obtainable for players who don’t own the Season Pass/DLC, until now. In Update 1.4, all Gear Sets will be available to all players in the future, for free. A quite understandable step from a developer’s and gameplay perspective, considering the new way of how loot is weighted, but also when you are looking at the Dark Zone and the problematic PvP balancing.

In Update 1.4, those Gear Sets will be available to people that haven’t bought the Underground DLC or the Season Pass yet, since they’ll be dropping everywhere in the game.

On the other side and in our opinion a really questionable and not trustworthy decision at all when exclusive-advertised content becomes available to everyone for free after just 2 months of its release. This isn’t the first time that something like this happened and at this point, Ubisoft should really think about of giving some kind of compensation to players who have paid real money for this content!

It’s not a secret that farming in the Dark Zone is the fastest way to get new items and this will still be the case for Update 1.4. It’s the most riskiest place in the game because other players/Rogue Agents could be waiting for you at every corner and take all the loot you have got just a couple of minutes before. However, you have to consider that the Open World around the DZ will change a lot and the amount of loot you can get outside of it is more or less almost the same, without the risk of being killed by real players.

New item level 33 Mods will find its way into the game and finally all Weapon Mods will be available in all item qualities. Be ready to equip a High End “Small laser pointer” Mod on your X-45 pistol.

We have already talked about loot weighting in our Update 1.4: Gear Set Changes Preview, but we have now got the definitive answer of how it will work. At first and as mentioned before, you will be able to find any kind of Gear Set in every activity and in the Open World, without having to buy the Season Pass or a DLC. This means for example that you don’t have to play 24 hours Falcon Lost to obtain a Sentry’s Call or Tactician’s Authority piece, or don’t have to spend money on the Reclaimer Gear Set as it will be free for everyone.

Incursion Rewards will still be weighted though and will guarantee you from now on some gear pieces of the one or other equipment slot, which allows you to specifically farm for a Gear Set item you really need in order to complete a build. It’s weighted as the following chart shows: 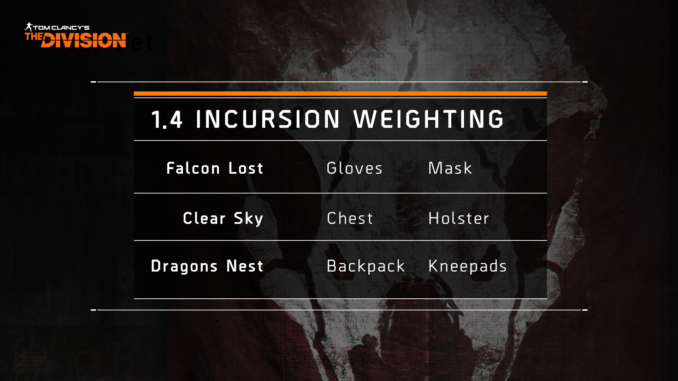 Did you know that you will receive a Field Proficiency Cache when your character would rank up from level 30 to 31? If yes, you might have already read our previously linked article regarding Sealed Caches in 1.4, but in general you will see much more of them in the next patch! Daily as well as Weekly Assignments will reward you with different types of caches that contain items and a bunch of Phoenix Credits and also Vendors in and outside the Dark Zone will start selling these caches. 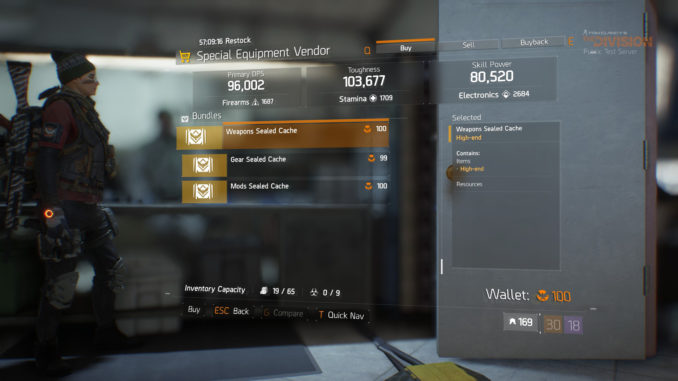 Speaking about Vendors, their stock timer will change from daily to weekly. The reason for this is that the developers would like to give players at level 30 more time to spend their credits on new Superior (purple) and High End items. Moreover the Dark Zone Vendor in DZ06 will sell random Gear Sets, one for each slot, whereas the Phoenix Credit Vendor will sell different Gear Sets for random slots.

For people who don’t like to spend too much time in the DZ, the DZ Rank requirements for items will be lowered. With Rank 20 you can already start buying DZ Sealed Caches.

Although crafting is not really addressed with Update 1.4, there are still some changes coming to it. As we have learned in the latest SotG episode, Division Tech requirements for crafting will be removed. Furthermore blueprints for named weapons will not longer be sold in the game, while those you have already bought will remain the same Gear Score. If you don’t know yet, named weapons will scale with the World Tier and therefore with the Gear Score, so the crafted ones might not be that good anymore.