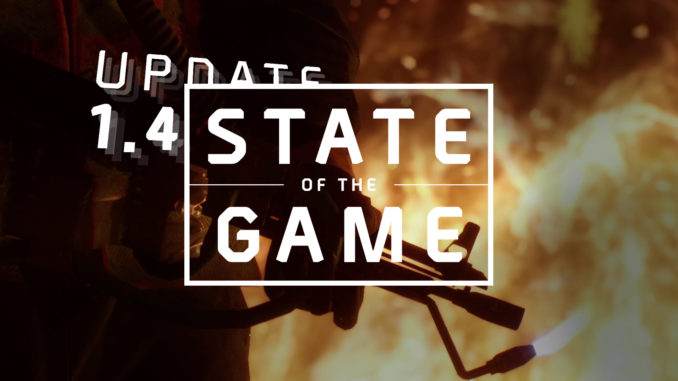 The probably most important question of when the next big patch will be available has been finally answered by the developers in yesterday’s State of the Game episode. The Division’s Update 1.4 will be released simultaneously on all platforms (PC, Xbox One and PS4) on Tuesday, October 25th.

The maintenance downtime in which the update will be deployed will start at 09:30 AM CEST and last approximately 3 hours. Quite enough for reading through the full patch notes. Although they haven’t been published yet, the full changelog will be, believe it or not, 21 pages long! The patch’s download size will be around 8 to 15 GB big, but that’s not confirmed.

On this last weekend before the patch goes live, the developers suggest to max out our currencies, especially Phoenix Credits and to look out for Performance Mods. If you would like to get a sneak peek of Update 1.4’s changes, you could read through our articles that cover the biggest changes of it:

The public test phase for the upcoming patch has ended a few days ago and for the developers of The Division, it was a huge success! The PTS (Public Test Server) allowed them to deploy game builds in a more controlled environment (as it was only running on PC) and therefore tweaking values and experimenting with different systems felt easier than waiting for the update approvals for Xbox One and PS4. Moreover it was the PTS first ever in Ubisoft’s gaming history.

We’re incredibly grateful for all your passion (and sometimes anger) and, due to its overwhelming success, we’re hoping to bring the PTS back for future updates

Speaking about future updates, the Survival DLC is The Division’s second major expansion that is scheduled for somewhere at the end of this year. Similar to the updates before, Survival as part of the Season Pass will be shipped together with a free update (1.5) and the developers are already thinking about a public test for this one too.

Unfortunately, players on PS4 will have to wait one month longer after the DLC’s release because of the Xbox One/PC exclusivity.

Here is what we currently know about Survival:

Don’t forget that the developers are still working on the game, so Update 1.5 might bring the from hardcore players requested “more challenging” activities back and also other things that will go live with 1.4 will probably be change and further improved in the future.