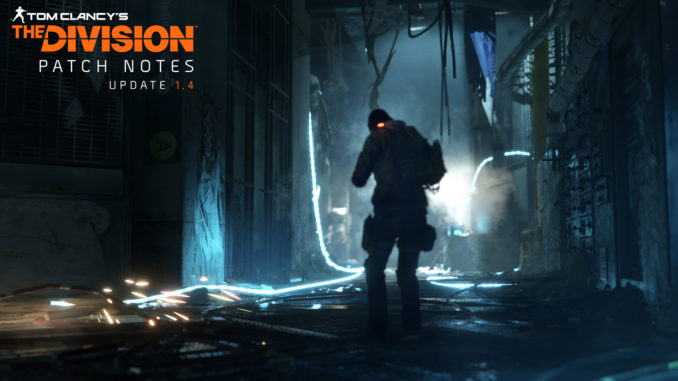 In less than 24 hours the new Update 1.4 for Tom Clancy’s The Division will be available for players on PC, Xbox One and PS4. Meanwhile, the final patch notes have been released a few hours ago. The developers weren’t joking about its size, considering that the full changelog is really around 21 pages long!

Actually, we had to re-configure our setup to get this posting out, but I guess that’s something on our plate ;)! It’s all about the new patch and while some of us already had the opportunity to check it out and almost know what’s coming, the following list includes all features, improvements and dozens of bugfixes that will be deployed during tomorrow’s maintenance, which starts at 09:30 AM CEST and lasts around 3 hours.

While we still don’t know the exact download size (Update: 4.5GB to 5.7GB) of the patch, the preload can be already started at 10:00 AM CEST. This was confirmed by Community Developer Hamish Bode on reddit.

For a deeper insight of the update’s core changes, you might want to have a look at the following articles, or just dig through the huge list down below:

Updated Rewards for all High Value and High Risk contracts:

Updated Rewards for all Underground Operations:

Updated Rewards for all Incursions:

Updated Rewards for boss drops and Supply Drops in the Dark Zone:

(Reference only values, for level 1 character)

Path of the Nomad