The application for ETF Bravo has ended today! A team of lucky players will meet in January 2017 at the studio of Red Storm Entertainment to talk about the future of the Dark Zone, which was the main topic in today’s State of the Game episode. Therefore, nobody else than Creative Director Terry Spier and Lead Designer Keith Evans – both are working at Red Storm – have joined Hamish Bode to share some new information on the next steps.

The Survival DLC will be released for PlayStation 4 next week Tuesday, December 20th and at the same time, The Division will officially start to support the PS4 Pro. We have already talked about it a couple of weeks ago and while no further details on what this actually means are known yet, an update for the Pro version could, in theory, bring 60 FPS, 4K-upscaled gaming and HDR.

Update 1.6 with Focus on DZ and PvP

We already know that Update 1.6 will be fully focusing on improving the experience in the Dark Zone and the PvP mode in The Division. While some people claim that Last Stand – the third major expansion – will be part of this update, there is still no official information that actually confirms this rumor. We somehow doubt that this will be the right time for the release of the last paid DLC, but stay tuned!

1.4 and 1.5 have drastically improved the PvE gameplay, which why the goal of the developers for Update 1.6 is to deliver the same enjoyment for the PvP mode, by making it more competitive and intense. 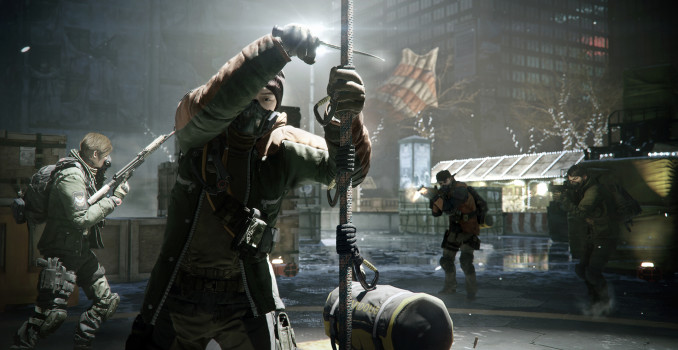 To achieve this, the gap between casual and pro players should be narrowed so that the feeling of having a chance against other players is always present, even when losing fights.

As mentioned before, the new Elite Task Force will play an essential part in this rebalancing process. Good luck to everyone who has applied! Invitation mails will be sent out during the next week, so make sure to check your spam folders regularly in the next days.

1.6 will introduce leaderboards for players in the Dark Zone. When entering a checkpoint to the DZ, monitors will allow you to track your progress and compare it with other players.

Activities like clearing Landmarks, cutting ropes, extracting items, Manhunts and so on will be tracked on a Weekly and Monthly basis. Completing these activities will give you points, sometimes even more on certain days and when reaching a predefined amount of points per activity or the end of a – let’s call it season, you will be rewarded with new types of Caches that will also find their way into the next update.

In addition to the currently existing DZ Rank, a new system based on reward tiers will additionally define what rewards you can get.

All statistics will be reset every time the end of such a period is reached, to ensure a fresh and fair start for all players who decide to compete and participate in a new round of DZ madness!

Discuss in Forum Leave us a comment below
« Play The Division for Free on PC this Weekend; December 15th to 18th » Server Maintenance: December 20th – Survival for PS4 and Pro Support