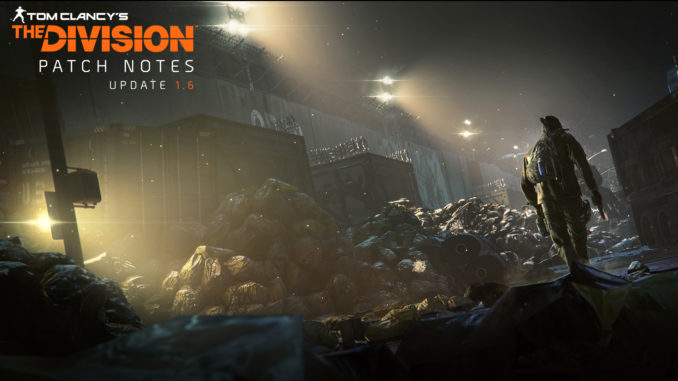 In less than 24 hours Ubisoft will release The Division’s third major expansion Last Stand together with the free Update 1.6. This time, the patch will be deployed for all players on Xbox One, PC as well as PlayStation 4 simultaneously and be ready to play tomorrow Tuesday, February 28th. In case you want to skip the details of the full patch notes below, take a look at the recently published DLC launch trailer.

In terms of the download size you can count with around 11 GB for the PS4 version and 8.5 GB for Xbox One and PC.

If the previously linked trailer wasn’t enough, you can learn more about both updates by checking out the following links.

To avoid confusion in prior to the release about how to join a multiplayer game in Last Stand, you can find it in the Terminal near the Recalibration Station.

Please note that you must own the Last Stand DLC to gain access to this content. Last Stand is available on February 28 for PC, PS4 and Xbox One.

The following content, changes, and bug fixes are available free for everyone. Update 1.6 is available on February 28 for PC, PS4 and Xbox One.

When entering a match of Last Stand, characters stats will be modified in order to bring a more stable balance to player versus player combat.

Other changes to stats:

With all these changes to Gear stats, here are the details of how existing gear should convert with this update.