Tom Clancy’s The Division turned 1 year old three days ago on March 8th, 2017. The first year of the game was a very intense one, for all the players out there as well as for the developers.

With 3 major expansions (Underground, Survival and Last Stand) and a couple of free updates that have been released during the first year, Ubisoft has now also revealed the plans for The Division’s Year 2.

First and foremost the developers would like to celebrate the game’s first year anniversary with some events and free gifts you can get when you log in until March 16th. 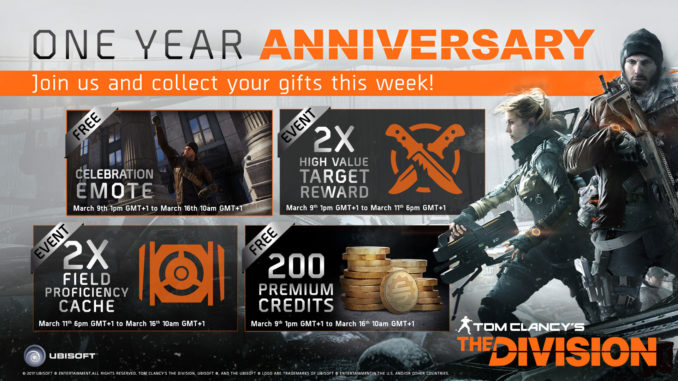 The one-year anniversary is a celebration of everything we’ve done in the first year of the game’s release. But we also want to turn ahead and look at Year 2 and how we’re going to support the game for everyone, for free.Julian Gerighty, Creative Director at Massive Entertainment

While the chance to grab the Celebration Emote and the doubled High Value Target Reward is already over, you can still get 2x Field Proficiency Caches as well as 200 free Premium Credits.

At the same time, Ubisoft used this opportunity to finally release a rough roadmap of The Division’s upcoming Year 2. In contrast to the first Season Pass, the content of the second year will be available for free and consists of two separate expansion DLCs, while focussing on the 3 terms Seasons, Feats and Loadouts in the first expansion.

We don’t know much about them yet, but the first one is planned to be released around summer and will be based on “an event system that drives players to activities that feature modifiers, leaderboards, and unique vanity items you can only get through these activities.”

Although nothing is cut in stone yet,  a raise of the player’s level cap or another map extension is not really planned for the near future.

Seasons are limited, timed events that drive players to activities that feature modifiers, leaderboards, and unique vanity items you can only get through these activities. For now, these Seasons are only planned in a safe PvE environment, however plans for PvP Seasons are not out of the door.

Every Season will be based on a certain theme with different modifiers, like for example “close range”, where players would have to approach each other even closer to get the final shot. This will automatically increase the build diversity as players would have to adjust their builds based on the Season’s specifications, given that they are willing to participate in it.

Although it’s completely optional to join, the unique rewards and new vanity items for each Season seem to be too tempting to miss the chance of earning them.

Furthermore, the long overdue loadout feature will make its way into the game to allow players to switch efficiently and quickly between their favorite gear builds.

Loadouts will not only consider the gear and weapons, but also include Skills and Talents as you can see in a first preview screenshot below. 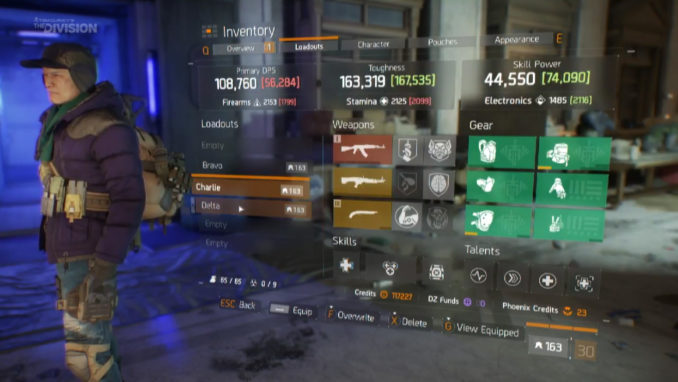 Feats are special achievements which can be unlocked by performing challenges in the game. Ranging from short- to long-term goals, the challenges consist of things like helping out other agents and the exploration of NYC.

Being able to accomplish such feats will reward the player with unique cosmetic patches which are then added to the player’s clothing. This way, players can easily distinguish between players who are more experienced and those who aren’t. A new vanity item slot is planned to be implemented with this feature, but the developers haven’t talked in detail about it yet.

The Feats feature will be applied retroactively, which means that if you for example have killed a certain number of enemies in the past during the first year, the related ingame achievement will be automatically unlocked for you.

New Feats will be added once the feature is live, but expect dozens of them being available at its launch.

For the second expansion, the developers are looking into ways to add more narrative content, however the developers’ primary goal is it to provide the best experience for players throughout this upcoming year, including regular bugfixes and server maintenances.

Now that we know what awaits us in The Division’s Year 2, what are your thoughts about it? Have you expected more?, like another Season Pass? Let us know in the comments below and have a nice weekend!

Discuss in Forum Leave us a comment below
« The Division Update 1.6 & Last Stand: Patch Notes and Start Times » Operation ISAC: Transmission 23 & 24; The Beginning of the End?