Today’s maintenance fixed an SHD Tech related resource bug in The Division’s Last Stand mode. Besides that and in a new episode of State of the Game, Hamish and Yannick have announced a Spring Celebration Event which is starting tomorrow, as well as unveiled more details about the still for May scheduled Update 1.6.1.

You can call it however you want, but Spring is here and that’s why the developers would like to celebrate it with us in form of more loot rewards and double Field Proficiency caches this weekend.

While The Division’s New York is still covered in snow, the sun has finally returned to some parts of the real world, and we feel that is a great reason to celebrate! 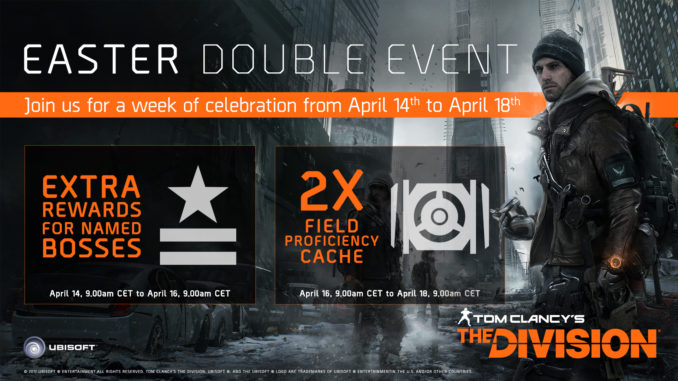 In addition to that, you should pay the in-game Premium Vendor a visit as there is a big spring sale going on where you can save up to 75% on outfits, weapon skins, backpack skins and emotes. The sale ends on April 20th, so check it out now! 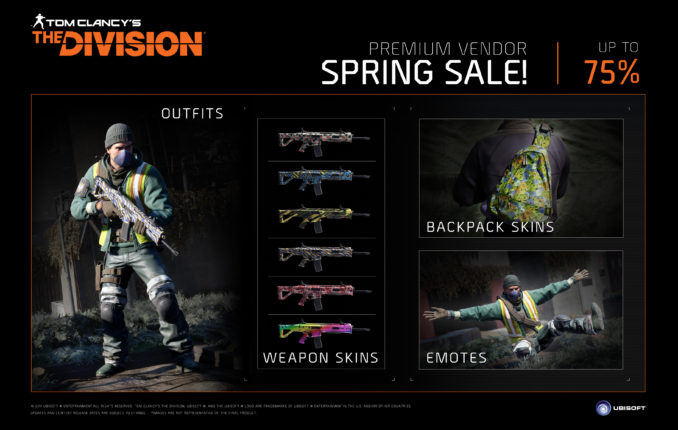 Last but not least we have also got some new details about the upcoming Update 1.6.1, whose release is still planned for May. As Yannick said during the stream, the dev team was able to finish the implementation of Loadouts sooner than expected and will therefore already go live with this next update and not just with the big Update 1.7 somewhere in July/August (not confirmed).

The Last Stand mode, for example, will introduce so-called “Proficiency Marks” (e.g.: “Best Kill/Death ratio”), which will give you extra rewards. In addition, an improved spawn-mechanic should help prevent spawn camping.

The Dark Zone, on the other hand, will receive some environmental changes with regard to Manhunts and unfair locations. Also nice to see is that the clearing of Landmarks will now finally give you additional XP, currency and free loot that doesn’t have to be extracted anymore (like it works with Supply Drops in the DZ).

With the map changes coming to the Dark Zone, the developers will also tackle environmental problems in general around the game world that could cause collision and cover issues.

These are by far not all changes. More information regarding the PC PTS for 1.6.1 will be provided during next week.

If you have participated in the last State of the Game survey and are interested in its outcome, you can find the results in today’s SotG Twitch VoD.

Discuss in Forum Leave us a comment below
« Help to Shape the Future of The Division’s State of the Game » The Division SotG: Update 1.6.1 PTS Tomorrow & ETF Charlie Inbound