Today was the 100th episode of The Division’s “State of the Game” stream and besides the revamped studio room and upgraded streaming setup, the team announced that Update 1.8.2 will go live on PC, Xbox One, and PlayStation 4 next week Thursday, June 14th!

About State of the Game

A bit more than two years later after the game’s launch on March 8th, 2016, the team at Ubisoft Massive has successfully hosted episode #100 of State of the Game in their re-arranged and very well looking streaming room.

SotG was brought to life to bring devs and community together, release and discuss news beforehand, to have a direct communication channel and to grant us some insights of how they are working behind the scenes.

While the stream was only available through Twitch so far, the team is currently also experimenting with alternative platforms such as YouTube or Mixer.

Do you remember Madison Field Hospital, the very first mission many of us have already played during early beta days, or General Assembly, the final campaign mission of the game? While the latter mission was still popular for farming the Colonel Bliss’ holster Exotic item, there was no real incentive for players to go there when it came to upgrading their gear. This will change now as the Legendary mission mode will be enabled for both missions to add even more variety when it comes to obtaining new gear.

The Shields feature will be a new achievement system in The Division which allows players to unlock new rewards for The Division 2. More information about it will be revealed next week during E3.

In addition to the “Jump Back In” video guide Ubisoft has published some days ago, the with next update introduced and so-called Reactivation Caches should help new players getting back into the game more easily in order to prepare them for end-game activities on the highest World Tier 5. These caches will be available for all players (not only new ones) at the Rewards Claim Vendor for exactly three weeks, starting with the launch of 1.8.2, and will consist of the following items and materials:

Update 1.8.2 will also add the new Encrypted Cache IV to the Premium Vendor. It will include four (+1) new Vanity Set Collections (Recon Patrol, Sentry’s Call, Commando, Path of the Nomad and Silver Bunker). 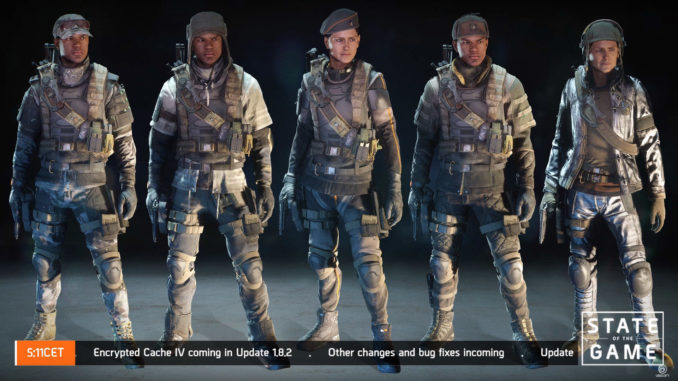 In addition to that and due to the high demand, the Premium Vendor will start to include non-collection items (including emotes) based on the contents of the Mk1-3 Encrypted Caches. Store exclusive items will be removed and the caches themselves will stay unchanged and still be available in the “good old way”.

Although the full patch notes for Update 1.8.2 will be released alongside the go-live next week, here is a short recap of what you can expect so far:

Discuss in Forum Leave us a comment below
« Ubisoft Publishes “Jump Back In” Guide and The Division Glossary » Tom Clancy’s The Division 2: New Setting in Washington D.C., Release, Beta & Gameplay Inbound