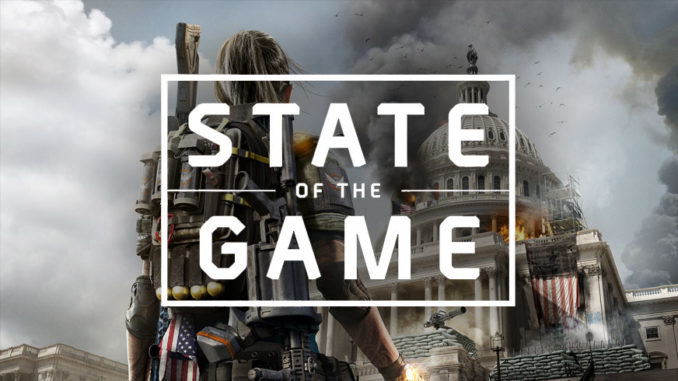 This week was all about the gamescom 2018 and the at the same time announced special editions as well as pre-order bonuses for Tom Clancy’s The Division 2. Moreover, The Division Update 1.8.3 has been released and the free Survival week extended.

With the announcement of aforementioned editions for The Division 2, Ubisoft and the developers seem to have quickly realized that more doesn’t always mean better and tried to sort out some of this confusion during the latest State of the Game episode from Thursday, August 23rd.

To begin with, The Division 2 will come in a variety of different versions, a Standard, Gold, Ultimate, Dark Zone, Dark Zone Definitive and Phoenix Edition, some of them only available in certain regions and with yet still unknown details to things like the contents of the Year 1 Pass and additional stash space.

To the surprise of many players, the Dark Zone Collector’s Edition exists in two different versions, one – the normal one – is only available to people in the EMEA (Europe, the Middle East and Africa) region and does – unlike its pendant in the NCSA (North, Central and South America) area – not contain the Year 1 Pass!

Although the majority of people would expect a Collector’s Edition to contain most of the downloadable content like the Sleeper Agent Edition of The Division 1 did, the EMEA version does not and will be available for the same price as the Ultimate Edition, which contains the pass, but not the physical goodies the DZ edition comes with. However, on the other side, the NCSA variant called Dark Zone Definitive will be a bit more expensive to make up for the additionally included pass.

All in all, the NCSA version of the Dark Zone edition seems to be a more complete and rounded up package for fans of the game, while it’s not clear what plans Ubisoft had in mind for players in the EMEA region who will have it a bit more difficult and in the end have to pay more if they want to get the full experience. This all comes down with the availability of the Year 1 Pass and whether it will be available for separate purchase or not at a later point.

Not that much information about The Division 2’s Year 1 Pass exists today. Besides people getting 7 days early access to the 3 free Episodes in the first year, exclusive customization items and additional activities, the developers have confirmed during the stream that this premium pass will not include content like Underground or Survival which would split the community apart.

Like many publishers are doing it today, players who pre-order the game will receive an early access perk. Same goes for The Division 2. As long as you pre-order something else than the Standard Edition and in the end decide to pay a little bit more, you will be able to enjoy the game 3 days earlier than others will do.

The developers seem to be aware that there’s still a competitive scene behind the game which why they will be carefully selecting content that will not necessarily give those players a direct advantage during those few first days, but focus more on story elements rather than character and gear progression. That being said, the at E3 announced Raids will for example not be accessible within that phase.

Also not far-fetched is the idea of allowing people to participate in certain events during the game’s development phase. When pre-ordering The Division 2, players will at least get guaranteed access to the Private Beta before the Closed Beta of the game starts.

You can, by the way, participate in the Closed Beta by signing up here.

As some of you might have noticed, the two Exotic weapons named “Lullaby” and “Ruthless” are part of different bundles which can be obtained by buying one of the aforementioned editions. However, this doesn’t mean that these 2 weapons will be exclusively available within those bundles, but can also be looted like every other weapon/item in the game.

The bundle itself should only give those players a glimpse of what they can expect of Exotic weapons, therefore the level of these items will be very low when you first start the game. Furthermore, equivalent Blueprints will give you the possibility to also craft these weapons later on.

The perhaps most annoying part in this whole controversy is the additional stash space as part of the Elite Agent Pack, which is only included in the most expensive editions – the Ultimate, Dark Zone Definitive (NCSA) and Phoenix Edition.

The Division 2 is an open world 3rd-person shooter RPG in which loot plays a huge and primary role. While the small stash size was already a big problem in The Division 1, Ubisoft’s proposed solution by simply hiding these contents behind a paywall is definitely the wrong decision and way to tackle this kind of an issue.

We will make sure that enough slots are already in place.

According to Ubisoft, they do not know yet how many additional slots will be granted to owners of the Elite Agent Pack or how many slots will be available in total, but no matter what the final result of this debate will be, either people who have paid more and will only receive a small amount will feel being tricked, whereas a big amount would upset people who didn’t want to pay more in the first place just to be able to store more items, which shouldn’t have been part of a paid DLC anyways.

Ubisoft also said that there are currently no plans for microtransactions to increase the size of this stash space. That means that if you are not willing to jump onto that Ultimate Edition ship, you will have to live with less stash space throughout your agent’s journey.

Although we wouldn’t necessarily put additional stash space into the Pay2Win category, it definitely gives players with more stash space an advantage over others, simply because of the different variants of gear that can be stored, depending on the amount of additional slots you will receive in the end.

Also the in the Elite Agent Pack included Skill Effect mixed up some people’s feelings because it looked like an exclusive Skill Mod as we know it from The Division 1, but it’s not.

The Division 2 will add more ways to customize your characters and your gear, one of these things are for example the new backpack trophies, but also the visual effects of skills will be customizable to some extent, and that’s what Skill Effects are all about. Therefore, the developers have said that the naming will be changed into Skill Visual to avoid further confusion.

Although the developers tried to quickly clear up all things and open questions related to The Division 2’s special editions and pre-order bonuses – which is highly appreciated – some questions still remain, and a bit of a bad aftertaste stays. We hope at least that this will help you making your decision when it comes to buying or even pre-ordering the game. You can also take a look at this overview to find out more about the editions’ content.

What do you think about this? Do you personally care about the early access topic in general, and what are your thoughts when it comes to DLCs such as increased stash space that will possibly affect the end-game content?

Discuss in Forum Leave us a comment below
« The Division Update 1.8.3 is Live and Survival Extended Until Monday » The Division Global Event “Strike” Brings Back Explosive Enemies