Ubisoft has revealed an action plan for preventing some problems The Division 2’s predecessor had to deal with in order to offer players the best possible gameplay experience and a fair environment when setting foot in Washington, D.C.

From server and connectivity issues to the real plague of cheaters who were able to act almost freely in the first game’s Dark Zone and the Last Stand multiplayer mode, players haven’t had an easy time, and so haven’t had the developers.

New mechanisms such as the new anti-cheat service “Easy Anti-Cheat” and an improved server infrastructure should solve this. 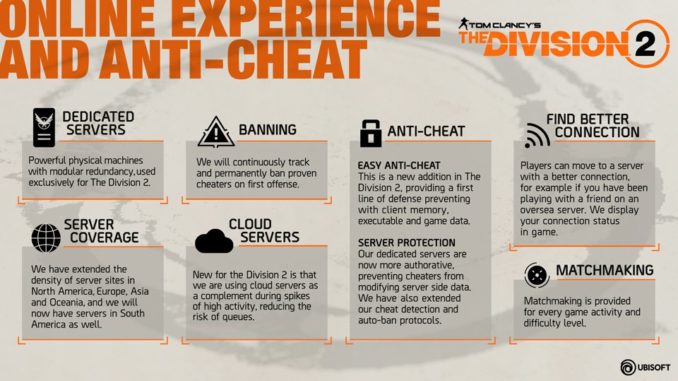 The Division 2 uses dedicated servers with modular redundancy to ensure a stable online gaming experience at all times. In addition, complementary cloud servers will be enabled during spikes of high activity/load and to reduce the chance of queues for faster logins.

The server density in North America, Europe, Asia, and the Oceania region has been extended, while new servers will be available in South America as well.

Easy Anti-Cheat uses cutting edge hybrid technology to counter hacking and cheating in multiplayer PC games and is one of the countermeasures the dev team has implemented in Tom Clancy’s The Division 2. It’s a combination of Client Memory, Executable and Game Data which forms the first line of defense against cheaters.

More authoritative servers should prevent the modification of server-side data and cheaters/suspicious players will be continuously tracked and permanently banned on the first offense if necessary.

Players can move servers for a better connection, or to play with friends from different regions. The connection status will also be displayed in-game to be more transparent.

Like in the first game, matchmaking gives players the opportunity to find and group up with other agents for every in-game activity and any difficulty level. Furthermore, the newly introduced “Call for Backup” feature allows agents to send out an immediate help request to nearby agents who can respond and simultaneously join your party.

Discuss in Forum Leave us a comment below
« Get a Free Game by Pre-Ordering Tom Clancy’s The Division 2 on PC Digital » Elite Agent Pack: “Additional Stash Space” and What it Ultimately Means