After the big community outcry some months ago due to the “additional stash space” as part of The Division 2’s more expensive special editions, people seemed to have accepted the situation, but are still not quite sure what it’s all about.

Ubisoft has stayed very silent about it since then, which led to players asking for whether monetization options would possibly allow buying more space in the future or not, and the answer is still that there will be no monetization when it comes to stash space.

So why has stash space become such a problem in the first place? One of The Division’s (1) issues at release was the small stash space which, after some time, was not enough anymore to store all the loot players had collected, in a game, where loot variety and build diversity plays a primary role.

Back then, the developers thankfully heard the community request and increased the stash size via Update 1.5 from 70 to 150 slots, the same amount of slots The Division 2’s stash will have – but not from the beginning.

In The Division 2, all players will start with 50 slots, while 50 more can be unlocked during campaign gameplay and 50 more when reaching the endgame through the reworked Perk system. That’s where the Elite Agent Pack comes into play. 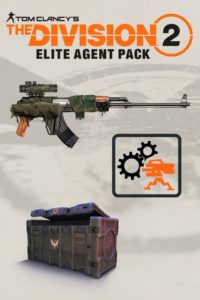 Around two weeks ago, the dev team finally shed some light on this mysterious bonus among other things during the Private Beta Special Report. Because more and more people keep asking for what it’s all about since the store descriptions will most likely stay unchanged, here is what you actually get for it.

You are going to unlock extra stash space early on when you play the game.Yannick Banchereau, Live Content Manager

Instead of starting with 50 slots like every other player, the Elite Agent Pack will unlock the 50 additional slots from the endgame right away, which means that you effectively start with 100 and just have to unlock the other 50 during the campaign playthrough as buyer of the Ultimate, Dark Zone Definitive or Phoenix Shield Edition.

Besides the fact that every player out there will have the same stash size when approaching the endgame content, the difference between, for example, a Gold and Ultimate Edition becomes smaller, even though it’s worth to mention that the Ultimate Edition consists of more goodies than just this “early stash space,” including outfits, an emote, a skill effect, etc.

From a community standpoint, it’s good to see that everyone will be treated the same from the very beginning when it comes to essential gameplay features, but the wording could have been more precise to avoid this confusion in the first place.

We hope that this clarification helps some undecided players out there when pre-ordering or buying their preferred version of the game, but also want to mention that more information about the Year One Pass content would be great – 4 weeks before The Division 2’s release on March 15th, 2019.