Lone Wolf? Time to Take a Look at The Division 2’s Clan System 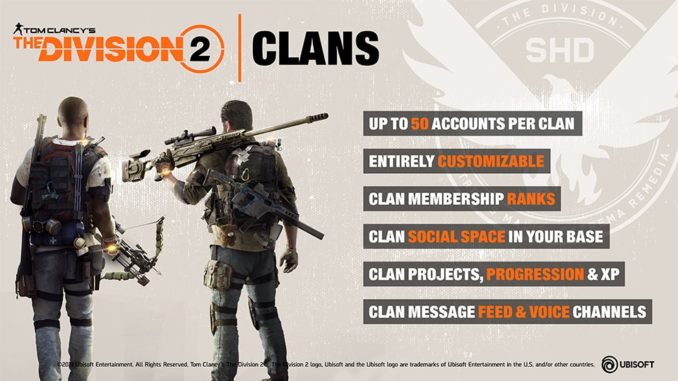 A new Intelligence Annex has been released which covers The Division 2’s incorporated and fully supported clan system. Joining a clan doesn’t necessarily mean that players have to fight against each other, but to also work towards a common goal and complete challenges in a more familiar environment than the normal matchmaking possibilities would offer.

The ability to create or join a clan will get unlocked early on by progressing in the game’s storyline. A clan can consist of up to 50 accounts with 4 characters each and comes with its own social space in your base.

Furthermore, clans feature a progression system, a message feed with the option to pin important news and two voice channels for up to 25 members each to socialize, share stories or plan for new activities and events. 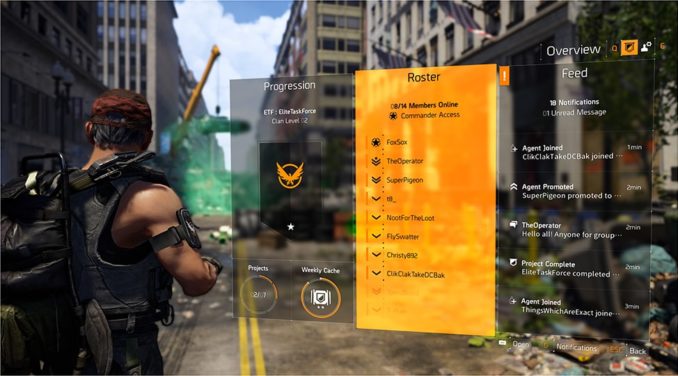 The first steps when creating a clan involves choosing a clan name, a short tag consisting of 3 capitalized letters, an insignia that can be designed based on a by the game offered selection of icons, backgrounds and border types and last but not least an optional notice for what your clan stands for.

Similar to the in-game matchmaking, three different privacy levels allow clan creators to define whether it should be possible for other players to find the clan, join right away or require a so to say application first before somebody can join the team:

In order to maintain some structure and permissions between clan members, the clan membership is organized into four ranks:

When reviewing applications, the Commander and Lieutenant can view the applicant’s characters and gear. 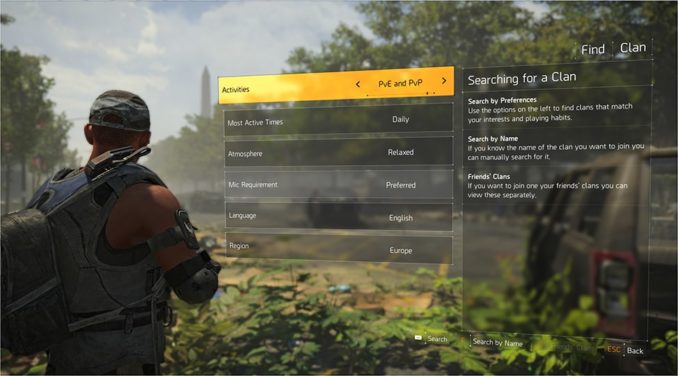 Finding and joining a clan is as much important as creating a clan. The interface for doing that comes with a variety of options so that players can filter out clans that match their preferred playstyle and requirements; 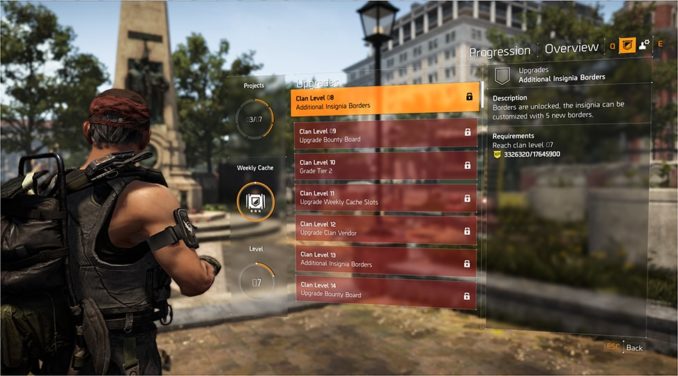 Regardless of your internal clan rank, every member will automatically contribute to the clan’s progression system when earning experience in the open world by automatically yielding Clan XP (CXP). Not only will this increase a clan’s level to maximum level 30, but also allows the clan creator to enhance the emblem by unlocking additional customization options.

On top of that, clans will work towards common goals in the form of weekly projects and upgradeable clan caches that contain rewards for all members of a clan.

Clan projects consist of weekly tasks that are focusing on particular areas of the game and grant a boost of CXP upon completion. More CXP can be earned when completing all of them within a week.

Clan caches are weekly rewards that are divided into three tiers – bronze, silver and gold. The more CXP members are earning, and the more side goals are completed, the more rewards these caches will yield at the end of the week.

The Clan quarters can be found in the Base of Operations, in the East Wing of the White House, and become your point of interest when you want to group up with other members, get an overview of the clan’s statistics and also to collect weekly rewards from a dedicated stash . Moreover, a to the clan’s progression tied special vendor will sell items, unique cosmetic headgear, and more for upgrading the clan’s insignia.