The Private Beta already gave a glimpse of what players can expect from The Division 2’s endgame content and with the new faction Black Tusk invading Washington,  D.C. and trying to take back the city in a continuous and everlasting fight with the agents of The Division, the rules will change.

Ubisoft has released a new gameplay trailer which features several activities that will obviously be already available at launch in March, including the Invaded World, factions that will establish so-called Strongholds, the first Raid named “Operation Dark Hours”, the three Specializations, High-End gear and weapons as well as the from the first game known 5 World Tiers.

But there is more to this. The open world will change once the campaign has been completed and encounters will be different from what you have experienced before.

The trailer also shows combat scenes between agents and hostile aircraft and reveals the location of Raid #1, which will apparently take place at the Ronald Reagan Washington National Airport. 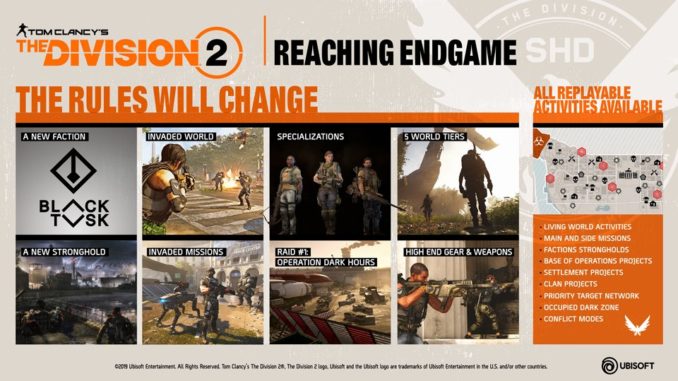