The Division 2 releases in around two weeks on March 15th, which why today’s State of the Game episode was focusing on the upcoming free content for Year 1, the included bonuses of the Year 1 Pass and the game’s monetization options.

With an extensive post-launch plan in mind, the developers will release new free content for all players during the course of the first year. 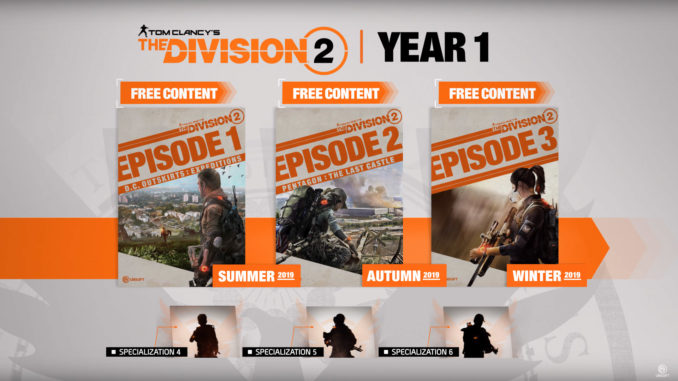 Besides three Episodes that will expand the story of the game by introducing new narrative driven content, new ways to play the game should lead to unique experiences each time you set foot in Washington, D.C.

Moreover, three new Specializations will be added and can be unlocked for free later on, featuring new Signature Weapons and skill trees. And with the first 8-player raid “Operation Dark Hours” starting at the Ronald Reagan Washington National Airport, more challenging activities such as “Tidal Basin” – a faction Stronghold controlled by the Black Tusk – will follow. 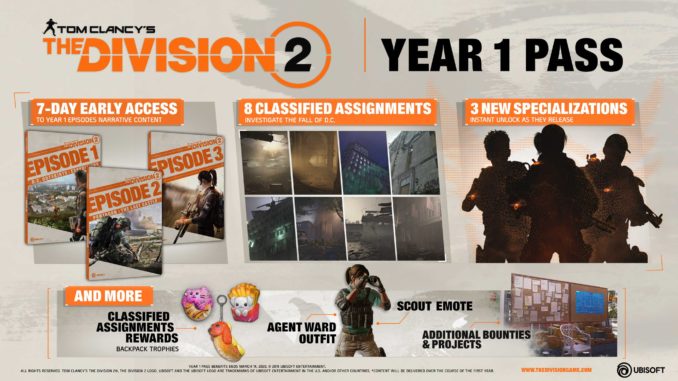 The Division 2’s Year 1 Pass is an optional addition to the full game and doesn’t give any advantages over players who don’t own the pass. The Year 1 Pass includes the following content:

The Year 1 Pass is included in The Division 2’s Gold, Ultimate, Dark Zone Definitive and Phoenix Shield Edition (version overview), but will also become available as a separate purchase when the game launches.

There will be two ways to purchase additional content for The Division 2 at launch. The first option is to buy the previously described Year 1 Pass, while an in-game Apparel store will offer cosmetic items in the form of microtransactions for purchasable Premium Credits.

After launch, the developers will introduce two types of Apparel Caches, consisting of cosmetics only to ensure that there will be no advantages over players who don’t want to spend additional money on DLC.

Getting cosmetics from gameplay should be fun, exciting and rewarding.

It’s up to every player out there to unlock these items naturally through normal gameplay or by participating in the newly time-limited Events that will yield dedicated Caches.

Standard Apparel Caches contain items of a “standard pool” of cosmetics that can be obtained via playing the game and completing different activities in the world. This type of cache cannot be purchased.

Event Apparel Caches contain cosmetics of a new and unique pool for a limited time. Event Caches can be earned by playing the game and completing activities during the event, and can also be purchased with Premium Credits during that time. Once the time-limited vanity event is over, these cosmetics will go over into the “standard pool”.