Alongside the release of The Division 2’s Title Update 2, the first and same-named Apparel Event: Invasion has been launched with a collection of new unique vanity items.

Apparel Events offer players an opportunity to earn new cosmetic items through time-limited Apparel Caches. Invasion consists of a set of 30 new appearance items to unlock! Please find more details about the three event phases at the end of this article.

The Invasion Cache pool consists of the following rewards, including Face Masks, Weapon Skins and Emotes. Furthermore, bonus items can be unlocked by completing other outfits or collecting all the items available in the pool. 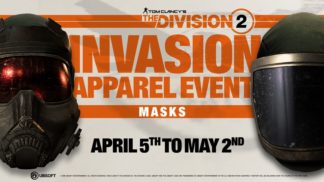 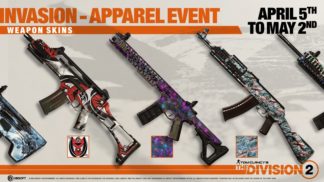 All players who log into The Division 2 during the first week of Invasion get one key for free! All Year One Pass holders will earn three additional keys as a bonus, available until Invasion ends!

Generally, Apparel Event keys can be earned from the following sources:

The event is divided into three phases, has started on April 5th and will end on May 2nd.