While Title Update 3.0 was successfully deployed earlier this day, players are now eagerly waiting for the game’s first Raid to become available in less than 48 hours.

Ubisoft has released a new trailer to introduce players to the Raid’s location at the Ronald Reagan Washington National Airport and to give a glimpse of the different challenges that will await us.

One of them will be the coordination between the two sub-groups as the whole team will split up into two parties of four players each to find and fight their own way through the airport.

Despite CERA’s best efforts to contain the outbreak at the Washington National Airport, the situation quickly became untenable, resulting in the airport being coated in DC-62 and subsequently abandoned. When the Black Tusk arrived in D.C., they set up shop in the now derelict airport.

The Black Tusk units are stronger than ever before and will try to defend the airport at all cost by bringing in heavy support such as unique bosses with the most exotic mechanics and technology that players haven’t experienced so far in The Division 2’s Open World.

The Raid will feature exclusive rewards, while the developers have thought about a very special one for the first team to finish it. 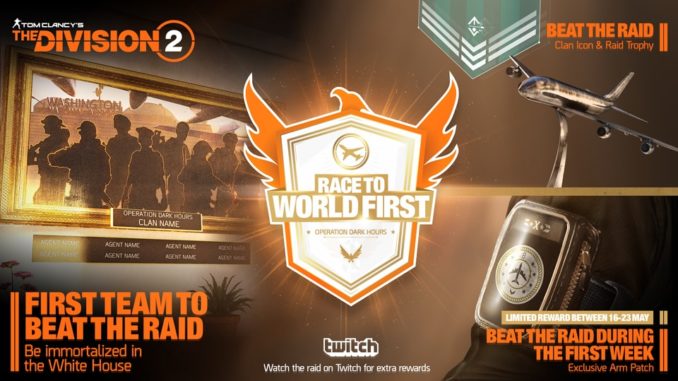 There will be only one team in the world and across all platforms which can and will complete this challenge first, and the players who manage to do so will receive a very unique and permanent recognition in the White House in the form of a painting in the corridor near the Clan room. This painting will be visible to all players in the game and show the eight players’ usernames as well as their Clan name. 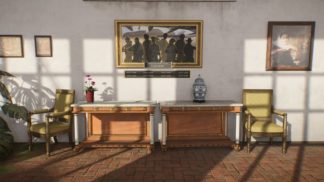 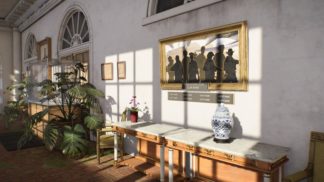 Although the aforementioned Clan name might lead to some confusion, it’s not required that all players in the team are also part of the same Clan.

The winners will be officially announced a few days after the completion. Find out more about the “Race to World First” Terms & Conditions on the official website.

Beat the Raid as a Clan

Another time-unlimited challenge requires players of the same Clan to complete the Raid to receive a unique Clan insignia as well as a unique Raid trophy.

Beat the Raid During the First Week

Last but not least a challenge for everyone out there who likes to take on the Raid that doesn’t require you to be in a Clan or group.

The reward will be a unique Arm Patch, but don’t hesitate too long as it will only be available to unlock within the first week after release.

The infographic also mentions extra rewards when watching the Raid on Twitch, so be sure to check the official channel to earn these rewards. 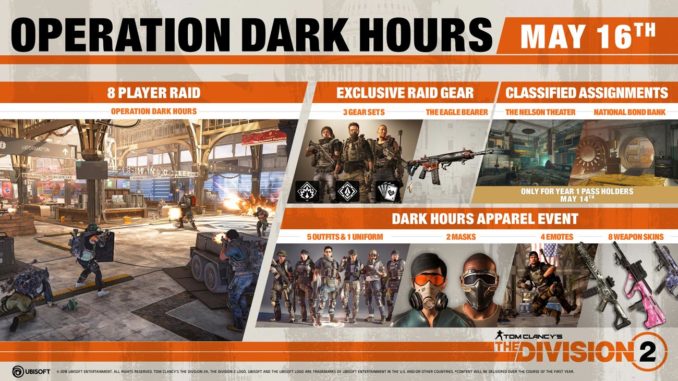 The Raid can be started by speaking with the helicopter pilot at the Base of Operations, which will unlock a new tab to build and manage for this game mode specific groups to start the game.

The following requirements need to be met by players in order to participate in the Raid;

A full party of eight is not required, but it’s worth to mention that the overall difficulty will not scale as it will be always scaled for eight players. 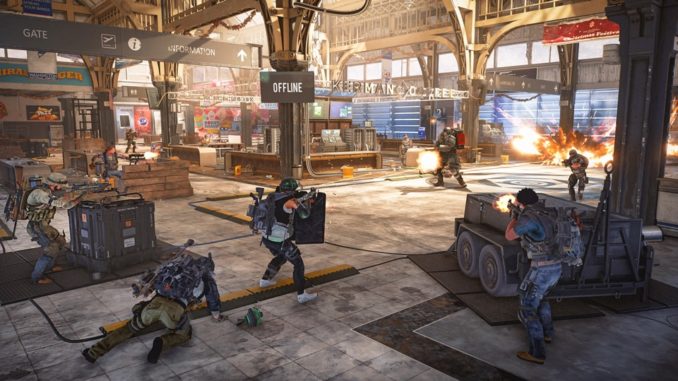 Besides the already listed rewards from above, the bosses in Operation Dark Hours will drop Raid-exclusive loot, including three new Gear Sets, a new Exotic Assault Rifle called “The Eagle Bearer” and vanity items. 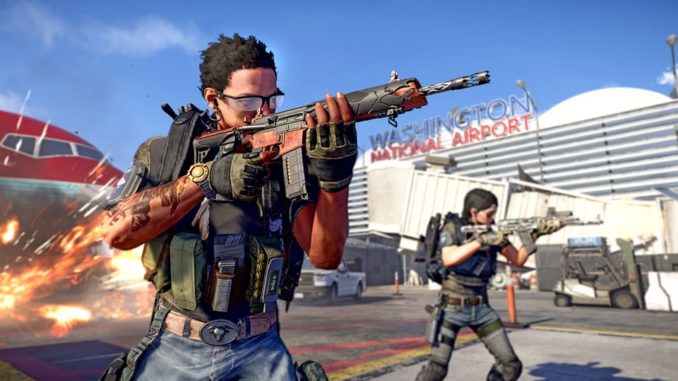 Although the Raid can be completed multiple times, a weekly timer will protect the boss’ loot from dropping again within the same week, until it resets for the week after.

A new Apparel Event will be launched alongside the release of Operation Dark Hours and will include the following cosmetic item rewards: