The Division 2’s first Raid is out for almost two weeks and while players are understanding the missing but in the future coming Matchmaking, the console community has become very vocal about its challenging difficulty.

It was one of the topics, besides the game’s roadmap, that has been discussed by the developers in the latest State of the Game episode #121 from May 22nd.

The Raid’s difficulty seems to be too high for console players due to different aspects like too small weak-points on bosses or specific mechanics and goals that are harder to accomplish on consoles than on its PC counterpart. There were also rumors that the difficulty will for sure be lowered pretty soon as it is “impossible” to complete as some players claim it to be.

According to the developers, there are currently no plans to adjust the difficulty as more data needs to be collected to get a bigger picture of the several segments of the Raid.

It was meant to be The Division 2’s hardest in-game activity which why the developers don’t want to jump to conclusions and give it a bit more time. Introducing more difficulty modes much like as other activities such as Missions are offering right now could and would most likely help with lowering the entrance barrier for players on all platforms. Stay tuned!

The World-First Raid title has been won by a squad on PC within five and a half hours after the new game mode was released, whereas it took players on both consoles around 30+ hours to complete it for the first time. 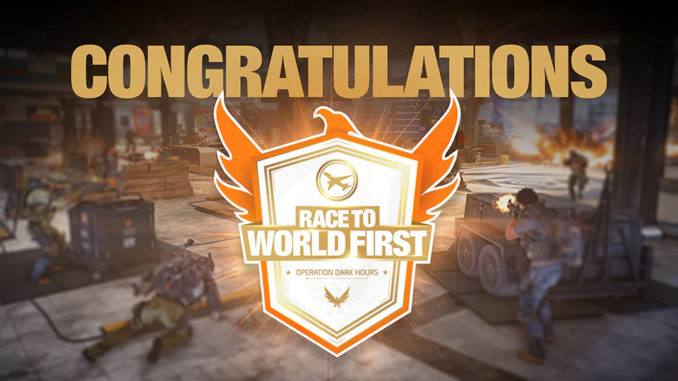 However, and besides the difficulty discussion, Ubisoft was listening to community requests and now will immortalize one team of each platform in the White House rather than only the one team who actually completed the Raid first.

Players will be shown the team portraits dedicated to their platform once the developers are done with the implementation in the next days.

Congratulations again to all the teams/players! In case you have missed this historical moment, check out this clip on Twitch.

In the meantime, multiple teams are currently competing for the fastest completion time of the Raid. The current World record is set at 16 minutes and 30 seconds on PC, by the same team who completed the Raid first.

The current record on PS4 is ~35 minutes and ~38 minutes on Xbox One. Despite all the difficulty complaints obviously still beatable, at least for well coordinated teams.

The last days have shown though that this might only last for some more hours until another team takes over the lead! It might be even possible to break the 15 minutes mark.

The developers are planning to release the next client-side patch Title Update 3.1 very soon and although there is no particular date for it yet, it will contain a lot of bugfixes for things like the unwanted aggressiveness of NPCs who recently started to rush players more often than intended, fire rate of semi-automatic weapons, sound, and cosmetic item issues, etc. Please check out the known issues list for more information.

The next content drop is a little bit further away and can be expected with Title Update 4, which will introduce a fourth Specialization as well as other activities that will be suited for all players. Another PTS will be launched before this update goes live.