A Gear Set consists of multiple set items and the more items you equip of the same set, the more you can get out of it as unique and very good set bonuses as well as a talent are unlocked on top of it. Gear Sets are definitely something you want to look into if you would like to be successful in the endgame of The Division.

Gear Sets in The Division 2?

It’s not necessarily important that all of these set items are top-rolled, because it’s the overall bonus that makes a Gear Set or even combinations of more than one set strong.

However, you might have to weigh up if it makes sense to equip a whole Gear Set rather than just wearing High-End or Exotic items with individual Gear Talents.

Set bonuses grant you an increase of certain item attributes. The first set bonus will be unlocked as soon as you equip at least 2 items of a set, while 6 items are available per set.

Equipping all items of one set seems to be useless at this time, but gives you the opportunity to build complex set-ups using multiple set bonuses from different Gear Sets, or combining builds by using 2 or more High-End items with good talent rolls. But it’s up to you if you want to make use of them at all.

The next set bonuses are granted with 3 or 4 equipped items, while the last bonus is actually a Gear Set Talent on top of the 2 stat modifier bonuses.

Update 1.6 has introduced Weapon Gear Sets for the first time. Weapon Gear Sets work similar to Gear Sets and consist of Exotic items, with the difference, that only one special set bonus will be unlocked when two special weapons of a set are equipped. 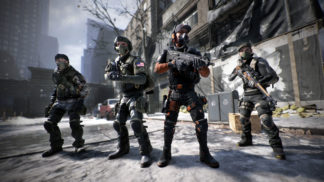 Furthermore and although the maximum Gear Score for these items is still 256, their primary stats of Firearms, Stamina and Electronics are always higher than their pre-existing counterparts, starting from the current maximum of 1273 to 1328.

Another advantage of these new gear items 2 item attribute can be re-rolled at the recalibration station.

Their bonuses (PTS preview of bonuses and talents) can be unlocked similarly to normal Gear Sets, while for the 5th and 6th piece bonus the equal amount of Classified Gear items need to be equipped. On the other side, equipping one Classified Gear Set piece can help you to unlock the normal 4-piece bonus when for example wearing only 3 pieces of the pre-existing Gear Set. Besides that, 5 equipped items of Classified Gear will also grant a buff to the existing 2 and 3-piece bonuses.

Classified Gear Set pieces can initially only be received from participating in Global Events. However, there is also a chance to find them during normal gameplay after the end of each event, but with lower drop rates. Three of these Classified Gear Sets will be introduced for every upcoming Global Event.

All Gear Sets come in a special look, which makes it possible to differentiate between standard gear items and set items, unless you decide to change its appearance with other vanity items.

Incursions might be the first place when you are looking for Gear Set items, but since Update 1.2, there are many more ways to get them! In short, all the following activities could reward you with one or more: 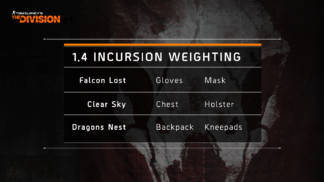 Every Incursion guarantees you gear pieces for pre-defined equipment slots, which allows you to specifically farm for items you really need. They are weighted like the following chart shows:

The following 14 Gear Sets are available at the moment, while each of them focuses on different play styles:

All existing Gear Sets (1.0-1.3) have been rebalanced in this update, while no new ones – except that B.L.I.N.D. has become Banshee – were added. Since Update 1.4, all Gear Sets are available for free and aren’t locked behind a paid DLC or the Season Pass anymore.

For a quick overview of aforementioned changes, check out this article or follow the links above.

No new Gear Sets were added with this update. Check out the 1.6 patch notes for what Gear Sets have been changed.